So you thought AMD’s 16-core “Threadripper” CPU was a beast? Intel may be preparing to launch an 18-core processor as one of its first chips to wear the Core i9 name.

Intel is scheduled to deliver a keynote at the Computex show in Taiwan tomorrow, but VideoCardz has already published a leaked slide providing some details of Intel’s upcoming Core i5, Core i7, and Core i9 X-series chips. 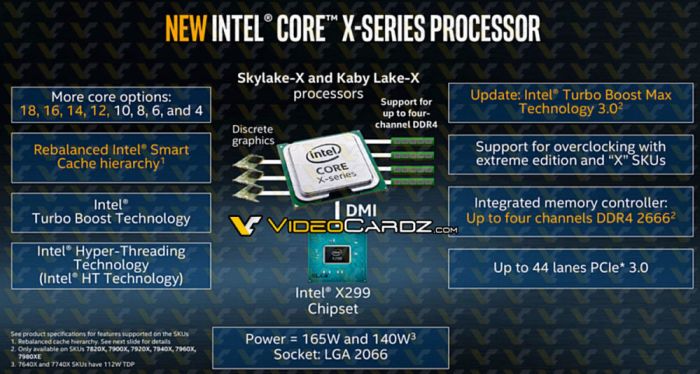 The details have not been officially confirmed by Intel, but VideoCardz notes that the information comes “from multiple sources.”

In a nutshell, it looks like the new Skylake-X and Kaby Lake-X chips will be available with between 4 and 18 CPU cores. Most models also support hyperthreading, so an octa-core chip, for example, supports 16 threads… and an 18-core CPU supports 36 threads.

Other features support for 4-channel DDR3-2666 memory, 44 PCIe 3.0 lanes, Intel Turbo Boost Max 3.0, and TDPs between 140 watts and 165 watts. Clearly these chips are designed for desktops and note for mobile devices.