Motorola may be looking to re-enter the tablet space, but it looks like tablet makers may be competing for their slice of an ever-shrinking pie.

IDC reports that tablet shipments in the first quarter of 2017 were down 8.5 percent from the same period in 2016. 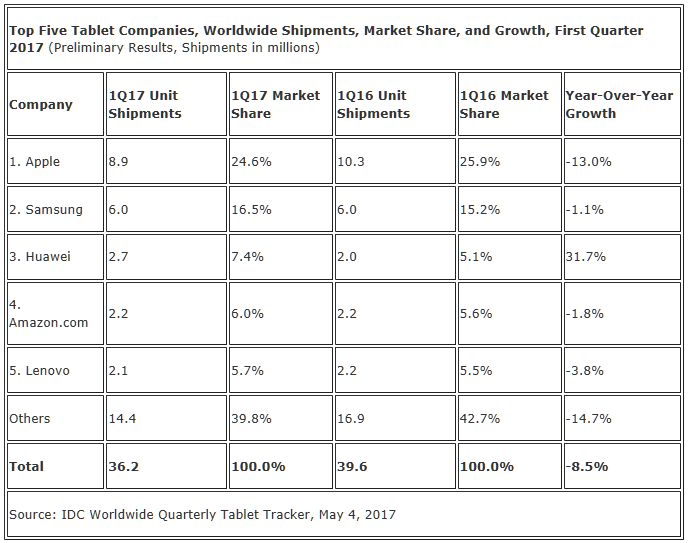 In terms of raw numbers, that still means more than 36 million tablets were shipped. But that’s more than 3 million fewer than the same period a year earlier.

Apple continues to be the top tablet makers, according to IDC, with nearly a quarter of the market share, and 8.9 million units shipped during the quarter. But Apple’s iPad shipments were down 13 percent when you look at the year-over-year numbers, and the company’s market share dropped from 25.9 percent to 24.6 percent.

In fact, only one of the top 5 tablet makers saw an increase in shipments: Huawei went from 2 million tablets shipped in Q1, 2016 to 2.7 million in Q1, 2017 for an increase of 31.7 percent. Everyone else saw declines.

So what’s going on? It’s tough to know for certain, but the market might be saturated: most people who want a tablet may already have one, and feel little need to upgrade every year. And plenty of people who don’t necessarily need a tablet might have one too. The market took off around the time the original iPad launched (it wasn’t the first tablet, but it was the first blockbuster hit tablet), and early adopters were quick to grab a device that was widely positioned as the next-big-thing in computing.

IDC’s tablet report doesn’t necessarily present a full picture, because it’s focused on slate tablets, which don’t have keyboards. Those that do have detachable keyboards are classified as “traditional notebook PCs or laptops,” and the research firm says shipments of those devices continues to rise… while slate shipments decline.

9 replies on “IDC: Global tablet shipments are down 8.5 percent”