Fibit has been one of the dominant players in the wearable space over the last few years, but as a growing number of smartwatches with built-in activity tracking features hit the market, the company has been under pressure to build its own smartwatch.

Now Yahoo Finance has published a few leaked pictures showing what the upcoming Fitbit smartwatch may look like, as well as some details of what to expect from the watch. 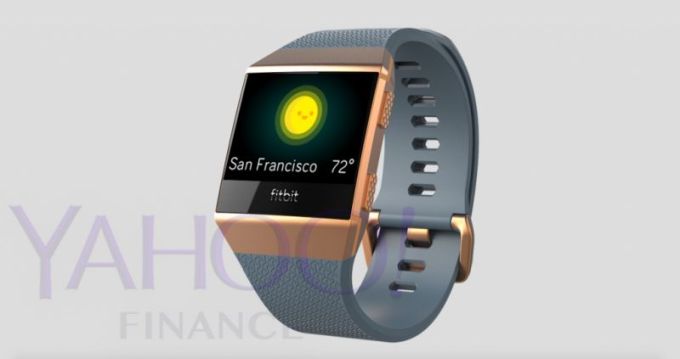 Codenamed “Project Higgs,” the watch is expected to launch this fall, likely ahead of Apple’s next-gen Apple Watch announcement.

It looks a lot like the Fitbit Blaze, but while the Blaze was basically a wristwatch-shaped activity tracker, the Project Higgs device is expected to include more apps, support for touchless payments, and Pandora integration for music streaming.

The watch is also expected to offer up to 4 days of battery life between charges, which is a lot more run time than you get from most smartwatches… although it’s also not as much battery life as you could eke out of a Pebble smartwatch. Fitbit acquired Pebble last year, but it doesn’t seem like the company plans to use Pebble-like low-power ePaper display technology in its upcoming watch.

Other features re expected to include GPS and a heart rate sensor.

Eventually Fitbit plans to launch an app store for Project Higgs, but it’s possible that it won’t be ready to go on day one.

Yahoo Finance has also published a picture of upcoming Bluetooth earbuds from Fitbit codenamed “Parkside.” It’s unclear from the report if these $150 earbuds will have integrated activity tracking features or any other “smart” technology.