Need to communicate with someone who speaks a different language? You can fire up Google Translate or other translation apps on your phone and start talking. But a startup called Travis thinks there are situations where you might not want to use your phone.

So they’re running a crowdfunding campaign for a handheld gadget that can translate between 80 different languages.

The Indiegogo campaign runs for a few more days, and has already raised more than a half million dollars in pledges, which is way more than the goal. So if everything goes according to plan, Travis translators should begin shipping in July. 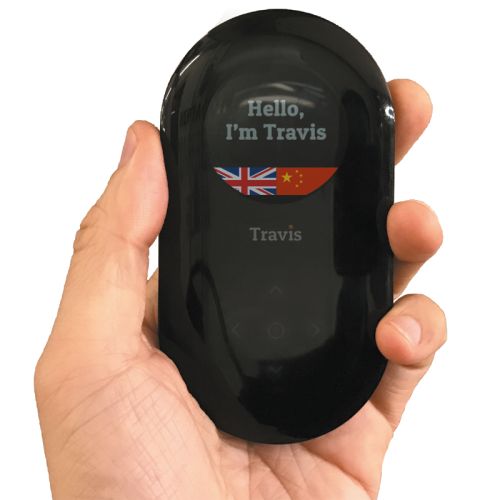 The gadget will have an estimated retail price of $199, but backers can reserve one for a pledge of $139 or more.

Here’s how it works: if two people are speaking in different languages, Travis should automatically detect that fact and start translating. For example, you can say something in English and then Travis will say the same thing in German. Then the other person speaks in German and Travis translates it to English.

Three-party conversations are also possible, but you’ll need to tell it “Travis, Spanish” before speaking in order to help it figure out which language to choose.

The system uses multiple (and unspecified) translation engines, and it’s supposed to be able to automatically pick the best one for the language pairing you’re using. Travis has a built-in speaker but also supports wired and wireless headsets, so you can use it in public or private settings, or in situations where not everyone needs to hear the translation.

It supports 20 languages when not connected to the internet, but the list goes to 80 when you have an internet connection via WiFi or 3G.

Features include a 240 x 240 pixel display, a touch surface for controls, and a battery that should last for up to 12 hours of offline use, 6 hours of online use, or 7 days in standby.

It’s that battery that may be one of the key selling points for this translator: you can use it for long conversations without worrying about running down your smartphone battery. The ability to use multiple translation engines from one user interface is also supposed to be something that sets this apart from smartphone apps, but I have to wonder how often you’ll actually take advantage of that.

Sure, I suppose it’s possible that you could find yourself in a situation where you need to communicate with 5 different people, each speaking a different language. But I suspect a translator like this would most commonly be used in face-to-face conversations between speakers of just two different languages, whether you’re a tourist trying to ask questions about a restaurant menu or a business traveler trying to make a deal. So you probably only really need one app at a time.

Still, it’s kind of nifty to think that technology has reached a point where you can carry a sub-$200 device in your pocket and use it to communicate with people around the world without cracking open a dictionary.