Mozilla’s Firefox web browser is open source, cross-platform, and historically more likely to support open standards than rivals like Internet Explorer, Edge, Chrome, or Safari. But Firefox also has a reputation as a resource hog, and it’s been slow to adopt some features used in other browsers (Firefox is only starting to add support for multiple processes, for example).

But it looks like developers are working on a new feature that will let users fine tune their performance. Bleeping Computer reports that a new Firefox Performance menu will let you adjust a number of settings that could affect performance. 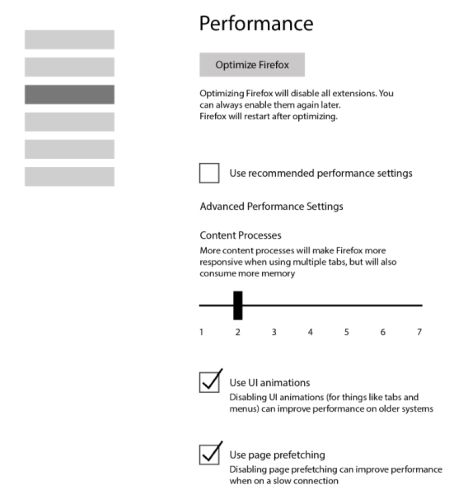 Have a computer with a relatively pokey processor and limited RAM? Then you might want to limit the number of content processes the browser uses.

Using a slow internet connection? Then page prefetching might not be for you.

And disabling UI animations might help the browser run better on older computers which might not have the CPU or GPU performance necessary to render those animations smoothly.

Odds are that you’ll want to leave most of these settings enabled if you have a new computer with plenty of memory and a speedy internet connection, since they’re all designed to offer a better user experience in exactly those situations. But giving users a choice to adjust the settings manually seems like a very Mozilla-like approach.

It’s unclear when the new Performance menu will make its way to the stable branch of Firefox. But you’ll probably see it in nightly and/or beta builds of the browser long before that happens.

4 replies on “Firefox to gain a performance settings menu”