Doctors and other medical professionals in Star Trek can diagnose virtually any known health issue with a handheld device called a tricorder. In real life it usually takes a lot more work (and many more gadgets and tests) to figure out what’s ailing a person.

But much like Star Trek’s Holodeck is the gold standard of virtual reality systems, the tricorder concept has inspired folks to develop better portable health tools.

For the past few years a number of teams have been competing to build the best tricorder-like device in the Qualcomm Tricorder XPRIZE competition, and recently the organization chose a winner to receive the $2.6 million prize. 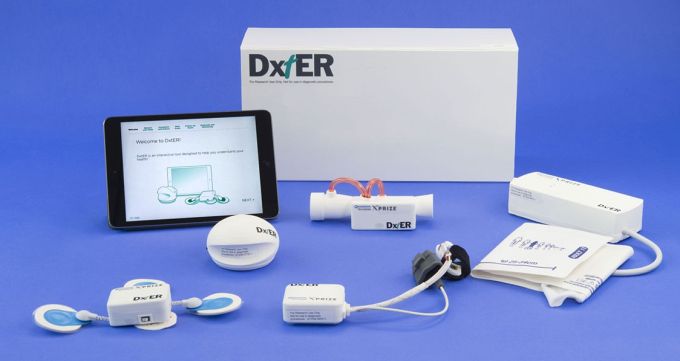 The DxtER system from Pennsylvania-based Final Frontier Medical Devices is officially the closest thing we’ve got to a real-world tricorder… at least according to the judges of this particular competition.

The system’s not quite as compact as a Star Trek tricorder. But it’s a kit of tools that weighs less than 5 pounds and fits into a small box and which features tools for monitoring blood pressure, heart rate, and other “data about vital signs, body chemistry, and biological functions.”

That data is then processed through a tablet and spits out “a quick and accurate assessment” in a way that should be understandable to a lay person.

In other words, the whole point of the system isn’t just to help medical professionals, but to provide something you can use in the home or in the field to diagnose certain conditions. One of the Final Frontier team members says the group’s system could prevent the need for up to 90 percent of emergency room visits. DxtER can either function as a standalone system, or it can send data to your doctor or other healthcare provider.

Right now the system is still just in the prototype stage, and it falls a little short of the goal of diagnosing 13 specific disease states required by the competition’s rules, but Final Frontier actually built in support for examining a number of conditions that aren’t listed in the Qualcomm Tricorder XPRIZE criteria, bringing the total number to 34.

That’s still probably (more than) a bit short of the number that a fictional tricorder could handle, but it’s not bad for a compact medical device that uses non-invasive sensors (no blood tests are required).

A second-place $1 million prize goes to a Taiwanese team called Dynamical Biomakers Group which has a 3-module system consisting of a vital sensor monitor, a blood and urine test kit, and a “smart scope” module.

The next step is for teams to continue testing and developing their tricorder-esque systems in hopes of eventually bringing them to market (and gaining regulatory approval to do so).