Chinese device maker Bben unveiled a line of tiny computers with Intel Apollo Lake processors at CES in January. This week the company is going even smaller.

Notebook Italia caught up with Bben at the Hong Kong Global Sources Exhibition and got an early look at a new PC stick featuring an Intel Celeron N3450 quad-core processor. 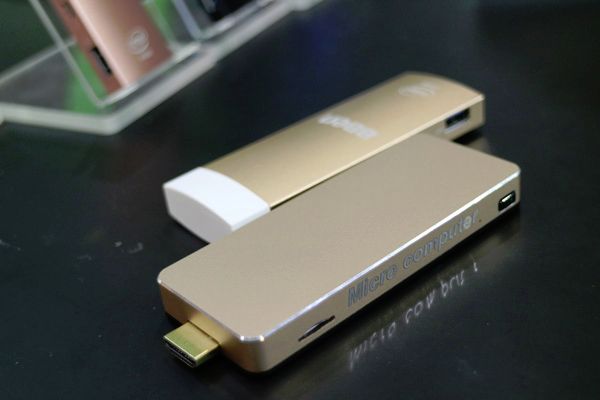 The PC-on-a-stick has the same basic design as an Intel Compute Stick, with an HDMI connector built into one end of the miniature computer, allowing you to plug the whole thing straight into the HDMI input on a TV or monitor.

This model does appear to be a bit on the chunky side for a PC stick, but it’s still a a fully functional computer in a pocket-sized package.

It has two full-sized USB 3.0 ports, a microSD card slot, a headset jack, and a dedicated power jack (unlike some models, this PC stick doesn’t use a USB cable for power).

There are also two vents on the back of the device to help keep the system from overheating, and there’s a small fan inside the case.

Intel’s N3450 processor is a 1.1 GHz quad-core chip with support for burst speeds up to 2.2 GHz. It has a 6 watt TDP, but should use less power under most circumstances, making it compact, low-power option for turning just about any display into a media center or adding a web browser to your TV. I suppose you could also do some light gaming too, but the Apollo Lake platform is a low-cost, low-power solution, so don’t expect stellar performance on games with bleeding edge graphics.

This sort of PC stick could also be useful in commercial environments, where it can be combined with a variety of displays to create digital signage, point-of-sales, or other commercial or enterprise solutions.

Intel currently has no plans to offer a Compute Stick with an Apollo Lake chip. The company’s latest models either feature a lower-power Atom x5 Cherry Trail chip or a more powerful Core M Skylake processor.

So it’s up to third-party companies like Bben to offer something in between, like this Celeron-powered model the company is showing off.

It’s not available for purchase yet, but some of the company’s other Apollo Lake-powered products are available from the Bben store at AliExpress.