Looking for a tiny, Linux computer that’s small enough to fit in a pocket, but which has a keyboard, display, and everything else you need for computing on the go? I guess you could spend $69 on a Pocket CHIP. but you could also just build your own.

That’s what a hacker that goes by the name of NODE has done, and he’s posted details of his DIY “Zero Terminal” for anyone that wants to build their own. 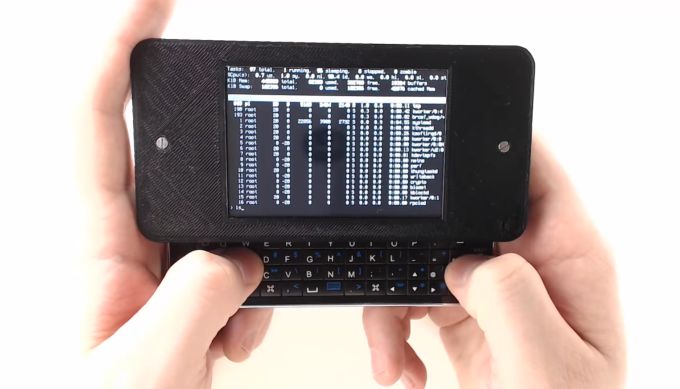 In a nutshell, here’s what you need:

You’ll also want a small battery… and a case. NODE made a 3D printed case and plans to release files that you can download and send to a 3D printer on your own, but right now the Zero Terminal is still a work in progress, so you may have to wait a while to get those files.

Or you can design your own.

This is hardly the first time we’ve seen someone build a self-contained computer by adding a screen and keyboard to a Raspberry Pi. But it’s one of the more polished looking pocket-sized PCs I’ve seen in a while.

Since the heart of the system is a Raspberry Pi Zero, it’s compatible with Raspbian and a number of other Linux-based operating systems. And since the idea is to repurpose a smartphone keyboard case, you can find plenty of models with nifty features including a slide-out function and backlit keys.

Add an HDMI output and you can also hook up the Zero Terminal to an external display and connect a keyboard and mouse to use it like a desktop PC.

5 replies on “Zero Terminal: A DIY handheld Linux PC made from a Raspberry Pi and a cheap iPhone keyboard accessory”