Nintendo’s Game Boy line of devices revolutionized the idea of what a handheld game console can do. This year the company did it again by launching a living room console that’s also a portable gaming tablet. But some folks still enjoy playing classic Game Boy titles that are decades old… and some folks have at least as much fun building their own DIY Game Boy systems.

Now that you can pick up tiny computers like a Raspberry Pi Zero, it’s relatively easy to scoop out the insides of an old-school Game Boy and outfit it with a modern, Linux-based PC that can play classic games.

But Peter Barker wanted to try to make something… smaller. 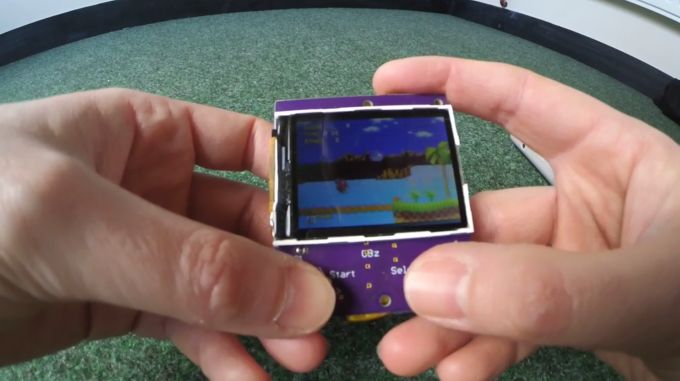 So he took a Raspberry Pi Zero, a 2.2 inch, 320 x 240 pixel LCD display that sells for under $10, and a few other components including a 200 mAh battery, and built one of the tiniest Game Boy style devices I’ve seen to date.

In fact, it’s so small that there’s not really room for all the usual buttons. Instead he used 2 5-way navigation switches. One acts as a D-Pad, while the other lets you move the switch to the appropriate button.

The system is running RetroPie software, which means in addition to Game Boy titles, you can play games from other classic consoles, watch videos, and more.