For years we’ve been able to get a rough idea of how big a smartphone was by looking at the screen size. The original iPhone had a 3.5 inch display. The HTC Evo 4G seemed enormous when it first launched, thanks to its 4.3 inch display. These days there are phones with screens as big as 6 inches.

But that figure alone doesn’t tell you very much anymore. As Android Central posits, maybe we need to come up with a new number. 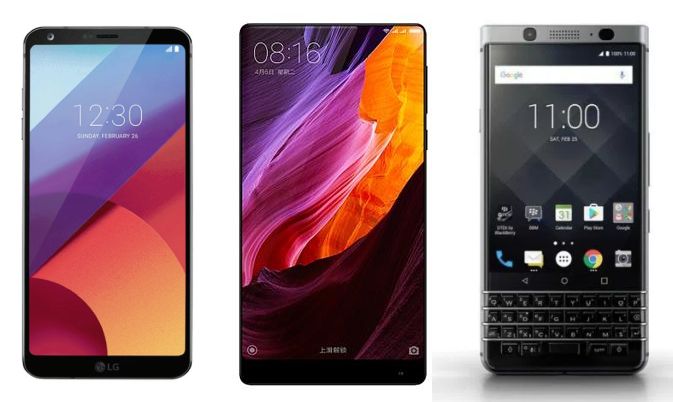 There’s a few reasons for that. The first is that some phone makers are slimming down the bezels, so a phone with a 6.4 inch screen like the Xiaomi Mi Mix might be about the same size as another phone with a 5.7 inch display.

The second reason? Not all phones have the same aspect ratio, so when you measure diagonally from one corner to the opposite, you don’t necessarily get numbers that are easy to compare.

BlackBerry is also going with a non-standard screen resolution for its new KeyOne smartphone. It has a 1620 x 1080 pixel screen that makes room for a physical keyboard below the screen. That’s a 3:2 aspect ratio (or 18:12, I suppose).

So while the LG G6 has a 5.7 inch screen and the BlackBerry KeyOne has a 4.5 inch screen, those numbers aren’t really telling you much about how big the phone is, how much surface area the display covers, or even how many square inches, square centimeters, or whatever the screen has.

In other words, the two phones are about the same size, even though one has a 5.7 inch screen and the other has a 4.5 inch screen.

I suspect many of us will probably keep mentioning screen size as a shorthand for phone size or display surface area for the foreseeable future. But it’d be nice if there was another single number that did a better job.

Meanwhile, I guess I’ll have to think about mentioning actual physical dimensions more often when writing about phones.