CopperheadOS is a security-hardened operating system that’s based on Google Android. The developers behind the operating system promise protection from zero-day exploits, enhanced browser security, stronger sandboxing and isolation of apps and services, and other enhancements.

You can download the CopperheadOS ROM and install it on a number of Google Nexus phones and tablets. But last year Copperhead started offering another option: you could buy a Nexus 5X or Nexus 6P phone with the operating system pre-installed.

Now that Google is no longer making those phones, the company has stopped selling those phones. Instead, you can now buy a Google Pixel smartphone with CopperheadOS. But it won’t be cheap. 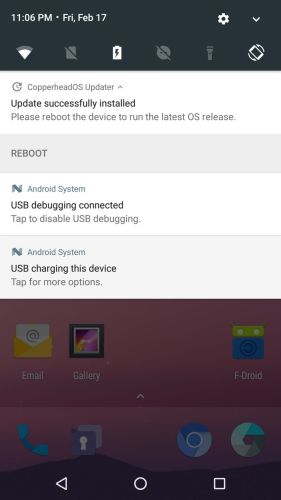 Prices start at $1,049 for a 32GB model with a 5 inch screen. You can also pay an extra $100 for a 128GB model. CopperheadOS Pixel XL phones with 5.5 inch screens are coming soon, and they’ll probably cost even more.

That’s $400 more than the price Google charges for versions of those phones.

So what do you get for that extra money? Support from Copperhead and the knowledge that you’re helping fund development of this security-hardened version of Android.

In addition to security, you also get a phone that protects your privacy: CopperheadOS disables all the usual Google services that phone home for analytics purposes.

That means you don’t get access to the Google Play Store. But you can sideload apps or install open source software from the F-Droid app store.