Watch maker Fossil entered the smart wearable gadget space in 2015, first by launching a few smartwatches and wristbands, and then by acquiring activity tracker company Misfit.

Now the company is taking the next (il)logical step… and introducing a whopping 300 new smartwatch styles. Basically that means just about every watch brand that Fossil offers now includes some sort of “smart” features.

Some are all-out smartwatches with Android Wear 2.0 software and AMOLED touchscreen displays, while others are “hybrid smartwatches” with the ability to display “discrete notifications” from your phone. 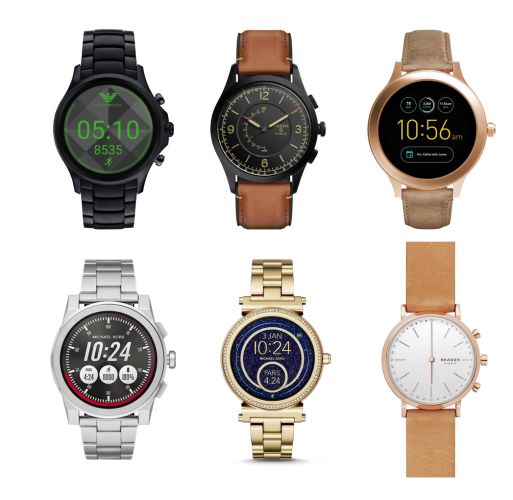 The hybrid watches include support for activity tracking and a side-button that can be assigned to a handful of activities. For example, you can use it as a camera button to snap a selfie from your smartphone, as a music control button, or to ring your phone to help you find a handset that’s fallen into the couch cushions.

Hybrid versions of Fossils’ DKNY, Mark Jacobs, Armani Exchange, Relic, Diesel, and other brands will launch later this year, with some models coming as soon as this summer and others coming in the fall or around the holiday season. We can also expect new Misfit, Fosil Q Accomplice and Q Activist devices.

As for the full-blown Android Wear smartwatches, Fossil says its 2017 lineup will feature Qualcomm Snapdragon Wear 2100 processors, “high resolution” displays, and support for pairing with Android and iOS smartphones (which is really a feature of Android Wear and not something that’s exclusive to Fossil’s watches).

Smartwatch models will be available from the Misfit, Diesel, Emporio Armani, and Michael Kors brands, and there are new Fossil Q Venture and Q Explorist models on the way as well.

Fossil is also introducing new “micro apps” for each brand, which will offer features such as the ability to use Instagram photos as your watch’s background.

FYI, there are actually quite a few smartwatch-related announcements making the rounds today, at the start of the Baselworld show. I probably won’t be covering most of them, because I’m increasingly convinced that smartwatches are falling into two camps: luxury fashion accessories and cheap commodity items.

I’m not particularly interested in either space as a whole, but from time to time there may be some items that pique my curiosity… like when a watch maker announces plans to offer 300 different styles. But just as I don’t feel the need to report on every cheap Android tablet, I’m not going to bother writing an article every time a new smartwatch is announced… at least for now.

One reply on “Fossil unveils 300 new smartwatch styles because… why not?”