Google is the latest company to enter the internet TV space. YouTube TV is coming soon, and the $35/month service will let you watch dozens of channels live over the internet, including ABC, NBC, CBS, FOX, CW, ESPN, USA, and FX.

There’s also a cloud DVR feature that lets you save programs for later viewing.

YouTube TV isn’t live yet, but you can sign up to be notified when it’s available in your area. 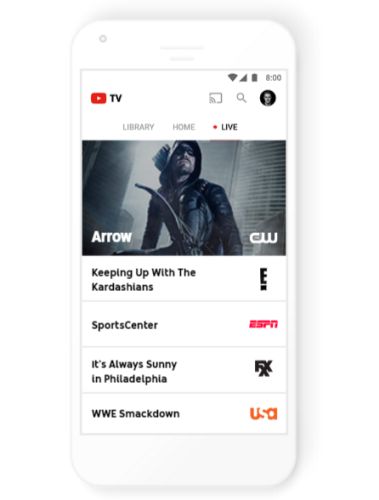 For the most part, the service sounds a lot like rivals Sling TV, PlayStation Vue, and DirecTV Now.

But YouTube TV has a few nifty features, including unlimited storage for the cloud DVR function. You can save as many shows simultaneously as you want and you don’t have to worry about running out of space. There is one caveat though: recordings are only saved for 9 months, so you can’t keep episodes or movies indefinitely.

Google also lets you link up to 6 accounts for a single price. And a YouTube TV subscription also gets you access to YouTube Red original movies and web series…. which I suppose might eventually get better now that Google has a new revenue stream for this kind of content?

At launch it looks like Google will include 44 network channels including those listed above and SyFy, Disney, and MSNBC, although it’s worth noting that the number includes multiple ESPEN, Disney, and Fox channels, among others.

There are also optional add-on networks including Showtime and Fox Soccer Plus. And Google says it’s reached deals with local TV stations to stream local news programs based on your location. 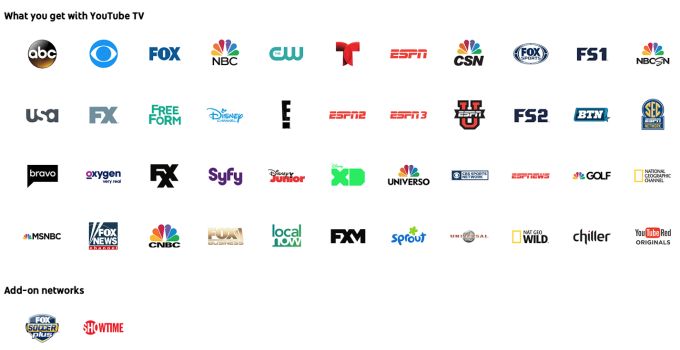 YouTube TV takes a mobile-first approach: apps will be available for Android and iOS. But you can also stream content to a TV via Chromecast or watch on any laptop or desktop with a web browser.

I wouldn’t hold my breath waiting for Apple TV, Roku, or Fire TV support… but who knows? Maybe Google will decide the benefits of making the subscription service available everywhere outweigh those of locking customers into the company’s own platforms.