The Razer Blade Stealth is a compact notebook from a company best known for making gaming hardware… and you can use the laptop for gaming. You’ll just probably want to plug in an external graphics dock to play bleeding edge titles.

When using the laptop alone, you get a much more portable system that weighs about 2.8 pounds, measures about half an inch thick, and which has a 12.5 inch display (with QHD or 4K options).

Razer equips the laptop with a 53.6 Wh battery, which reviewers say provides around 5.5 to 7 hours of run time. But now Razer has a new accessory that could double the amount of time you can use the laptop without plugging into a wall jack. 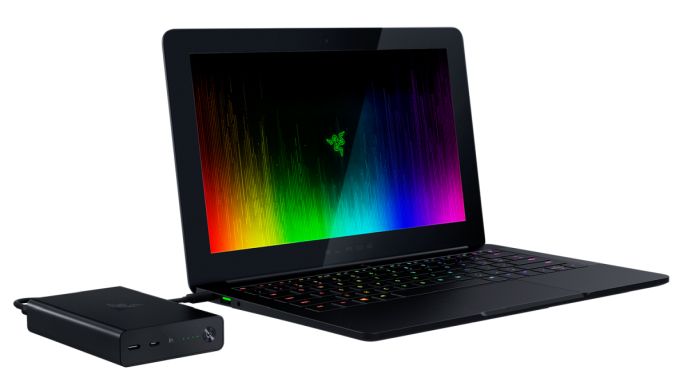 The Razer Blade Stealth can be charged via a USB Type-C cable, so all you need to do is run a USB-C cable from the Power Bank to the laptop to top off your battery.

Razer says the Power Bank can extend the Razer Blade Stealth’s battery life to up to 15 hours.

The battery supports Qualcomm Quick Charge 3.0 and takes about 2 hours to fully charge using the 45W adapter that comes with the Razer Blade Stealth laptop.

It also has dual USB Type-A ports which you can use to charge a phone or other gadgets. And the battery is sturdier than most portable power banks, thanks to a CNC aluminum body.

This is hardly the first external battery on the market, but most cheap models are designed to charge low-power devices like phones or tablets. A handful of models can also charge laptops, but few of those feature USB Type-C ports. That will likely change as USB-C charging becomes more common in laptops.

If you are looking for a more powerful (and versatile) solution though, ChargeTech’s 27,000 mAh battery offers up to 85W output and features a full-sized power jack that allows you to plug in just about any laptop adapter. It sells for $169 at Amazon.