Jolla may be pretty much done launching its own hardware, but the Finnish company continues to released updates to the Linux-base Sailfish operating system that powers its phones and tablets, as well as some third-party devices.

The latest update is Sailfish OS 2.1 “Iijoki.”  It includes a number of bug fixes, some architectural changes, and a handful of new features. 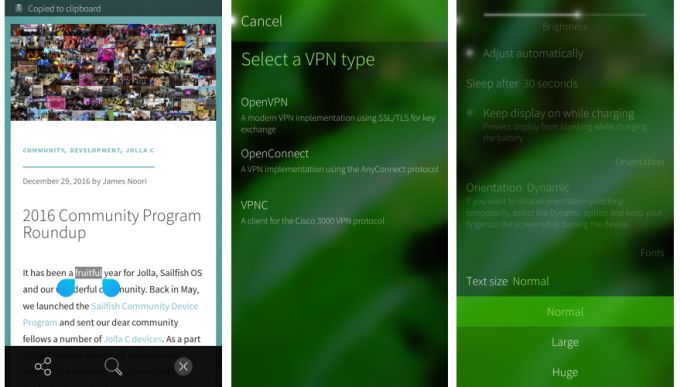 While the updates should be useful for existing users, they also serve to highlight some of the gaps between Sailfish and other mobile operating systems such as Android and iOS: one of the highlights of Sailfish OS 2.1, for example, is the ability to copy and paste text in the default web browser. That’s a feature that’s been available on other platforms for ages.

Not every change is a step forward: Facebook notifications have been removed due to an API change.

In other news, while Sailfish OS is based on open source software, it also includes a fair bit of proprietary code. Jolla CEO Sami Pienimäki said this week that the company is working to “further open source Sailfish code, in particular in the areas of apps and UI.”