Facebook may have started out as a website where people could share status updates and see what their friends were up to. But these days it’s a platform for discovering news (some of which is even real… although some is not), organizing events, and watching videos.

Now the company wants to bring that last bit to your TV. 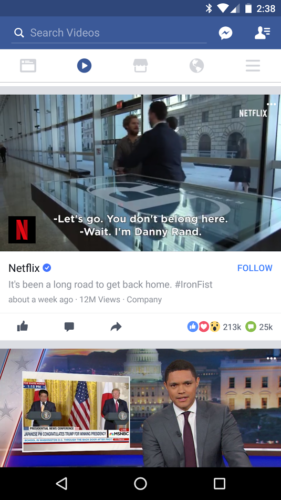 Recode reports that as of early 2016, Facebook users viewed “more than 100 million hours of video” each day, which might not be quite as impressive as the “hundred of millions of hours” watched by YouTube users, but it’s still an awful lot.

YouTube, by the way, already has a series of smart TV apps.

The difference is that YouTube is first and foremost a video service, while Facebook videos are typically encountered a long with a mix of text, links, and pictures as users scroll through their Facebook feeds. I’m not sure how often people go to Facebook with the goal of watching videos, which makes me wonder how much demand there is for a smart TV app.

I guess it depends on whether Facebook can entice content creators to upload content that isn’t available on other platforms, or create a user experience that makes it valuable for viewers to watch on Facebook’s app rather than YouTube or another service.

Facebook is also updating the way videos work on its website and in mobile apps. There’s a new Watch and Scroll option, for instance, that lets you minimize a window to keep it playing in a picture-in-picture window while you continue to browse Facebook. Android users can keep videos playing in the background even when they’re looking at another app. And there’s an option to auto-play videos with the sound turned on when you’re using a phone, if that’s something you actually want to enable.