After years of playing second fiddle to Intel, AMD is launching a new set of processors that look truly competitive with some of Intel’s best desktop chips.

AMD has been saying for a while that its Ryzen chips would rival Intel’s top-tier processors while using less power and selling for lower prices. Now the first of those chips are almost here.

AMD’s Ryzen chips will be available starting March 2nd, and they’re up for pre-order now with prices starting at $329.

The first Ryzen chips are aimed at desktop computers. We’ll have to wait until later this year for more energy-efficient laptop chips based on the same Zen architecture used for Ryzen.

So, quite honestly, since Liliputing tends to focus on small, low-power computers, these are the sort of chips I wouldn’t normally pay that much attention to. But the new Ryzen processors are exciting for a few reasons.

They represent a huge performance boost over AMD’s previous-gen chips, at a time when we’re used to seeing much more incremental upgrades. And they could make the high-end PC chip space much more competitive in the coming years.

AMD says it set a goal of reaching 40 percent more “instructions per clock” for chips with its new Zen CPU cores than with the previous “Excavator” technology. Instead, the company managed a 52 percent improvement. 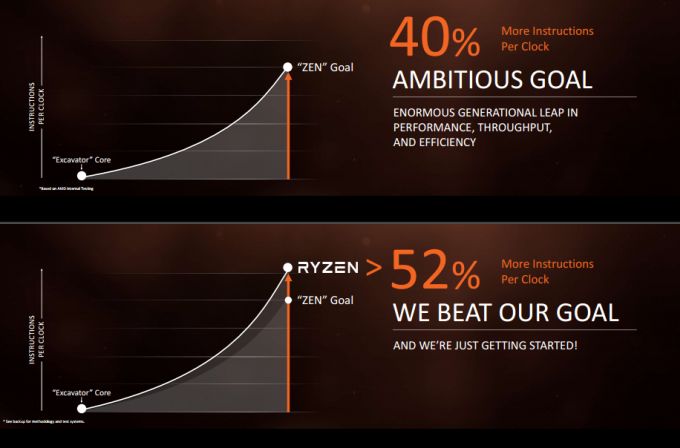 Here’s a run-down of the first Ryzen chips:

Each chip supports hyperthreading, so you get support for 16 separate threads from the 8-core processors. And each can also support boost frequencies, allowing the chips to run at higher speeds than their base values.

Of course, Intel is also continuing to crank out new chips. But the next-gen “Coffee Lake” and “Cannonlake” processors from Intel are expected to offer more modest year-over-year improvements than AMD’s jump from Excavator to Zen.