The Raspberry Pi Foundation’s Compute Module line of devices are basically tiny computers that look like sticks of laptop memory. But they feature a processor, memory, and storage, all stuffed into a tiny package.

What they lack are USB and HDMI ports. You’re not supposed to use a Compute Module as a desktop PC. Instead, it’s designed to allow professional and amateur device makers to create their own products powered by the same hardware used in a Raspberry Pi computer. For example, NEC plans to launch a series of smart TVs that use the Compute Module 3. 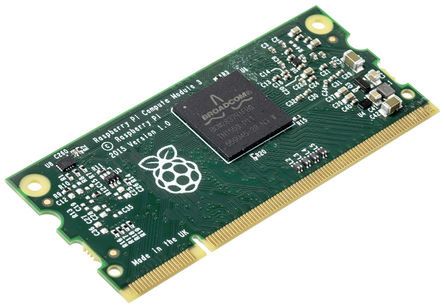 That means it has the same 1.2 GHz quad-core ARM Cortex-A53 64-bit processor and the same 1GB of RAM. It also has 4GB of eMMC flash storage.

There’s also a new Raspberry Pi Compute Module 3 Lite, which has an SD card interface instead of built-in storage, allowing users to connect to eMMC or SD card storage. The Lite model is also a bit cheaper.

The Raspberry Pi Compute Module 3 is now available from Element14 and RS Components.