The Nintendo Switch is a game system that blurs the lines between a traditional game console and a mobile gaming device. The Switch features a touchscreen tablet that you can use for gaming on the go, a docking station that makes it simple to plug the Switch into a TV and charge the tablet, and a wireless game controller that you can also take apart and slap onto the sides of the tablet for gaming without touching the screen.

Nintendo unveiled the Switch in late 2016, and now the company has announced that it will go on sale March 3rd for $300.

It’s already up for pre-order from Best Buy and Walmart and listed as coming soon at Amazon. 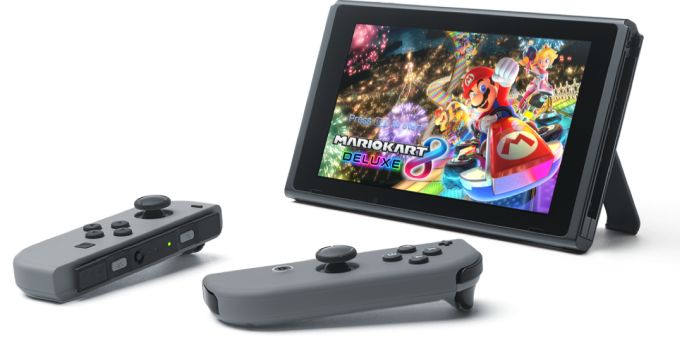 At an event in Tokyo, Nintendo revealed many more additional details about the Switch. Here are some highlights:

That just barely scratches the surface. The left and right Joy-Con units both have motion sensors, the left model has a screen capture button that lets you save pictures of games quickly, and the right unit has NFC for reading and writing Amiibo data and a sensor that can detect shapes and distance to recognize, for example, your hand shapes if you’re playing rock, paper scissors.

Some of the games that will be available at launch include The Legend of Zelda: Breath of the Wild, Sklanders Imaginators, Just Dance 2017, and 1-2 Switch, which includes a series of mini-games designed to take advantage of the new hardware.

Other games that should be available soon include Mario Kart 8 Deluxe, Sonic Mania, and Lego City Undercover. Later this year we should also see Super Mario Odyssey, Elder Scrolls V: Skyrim, and NBA 2K18, among others.

Games are expected to run around $60 each.

Nintendo is also launching an online service that lets you play mulitplayer titles with other users who aren’t in the same physical location. That service will be available for free at launch, but Nintendo plans to start charging a subscription in the fall.