Dell’s XPS 13 laptops have always been small, yet powerful computers. But the new Dell PXS 13 (9365) adds a new trick: it’s a fanless computer, thanks to its low-power Intel Kaby Lake-Y (4.5 watt) processor.

Oh, and it’s also the first XPS 13 with a convertible tablet-style design. Flip the screen back 360 degrees and the notebook transforms into a tablet.

First introduced this week, Dell is showing off the XPS 13 at the Consumer Electronics Show in Las Vegas, and plans to begin selling the convertible notebook on January 5th for $1000 and up. 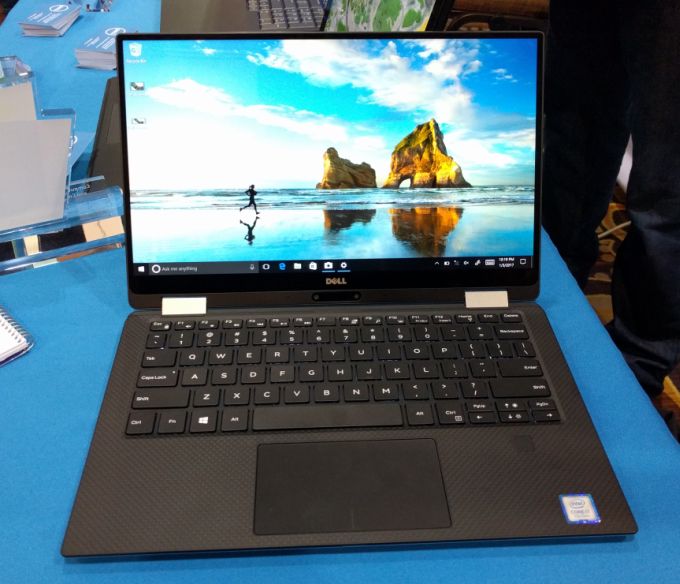 The biggest differences between this laptop and other members of the XPS 13 family are the touchscreen, 360 degree hinge, and Core i5-7Y54 and Core i7-7Y75 processor options.

But there are also a few other features to set this model apart. For instance, it has an active digitizer with support for a Dell active pen with 2,048 levels of pressure sensitivity.

The tablet also has a fingerprint reader built into the carbon fiber palm rest next to the touchpad. And there are two Thunderbolt 3/USB Type-C ports on the side of the notebook.

While there aren’t all that many ports built into the laptop, Dell offers optional accessories including a USB Type C to Type A adapter and an adapter with HDMI, VGA, Ethernet, and additional USB ports.

There’s nothing stopping you from just buying your own USB hub, Ethernet-to-USB adapters, or other peripherals.

While I only had time t spend a few minutes with the XPS 13 convertible, it seems like a pretty nice little machine with a good screen, good keyboard, and a sturdy hinge. But the $1,000 price tag makes it a bit of a tough sell, especially since this notebook uses chips that are significantly less powerful than the ones used in non-touch versions of the XPS 13.