The makers of last year’s unusual Gole1 mini PC are back, this time with a model featuring a larger screen and a bigger battery.

It’s called the Gole1 Plus, and like the earlier model, it’s basically a small desktop computer with a touchscreen display… or a chunky tablet that you can also use as a desktop.

The Gole1 Plus should be available soon for about $200. 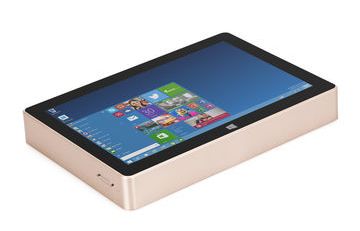 There’s a 6,000 mAh battery which should allow you to use the Gole1 Plus like a portable tablet-style device, or at least to unplug it and carry it around without shutting down the computer.

Some of the specs are a bit unclear. According to a product sheet sent to MiniPC DB, there are also two USB 2.0 ports, but a listing on a wholesale website says the Gole1 Plus has three USB 2.0 ports and a micro USB port.