Dell is unveiling a new device aimed at creative types looking for a large touchscreen device with support for pen input and the ability to function both as a display and an input device for creating and editing graphics, music, video, and more.

It’s called the Dell Canvas, and it looks a lot like Microsoft’s Surface Studio, thanks to its large screen and adjustable stand that allows you to use the machine like a monitor or like a slate that’s propped up at a gentle angle for drawing.

But Dell’s solution isn’t an all in one desktop. It’s a monitor that you can use with any PC. 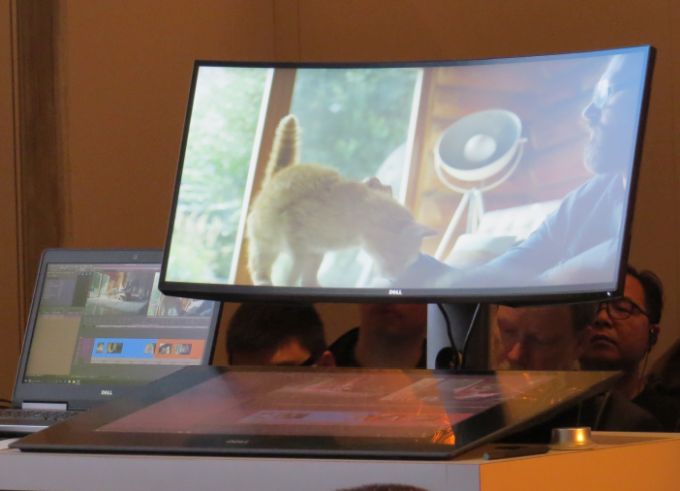 That means you may be able to hang onto the system longer, since it might work with your next few computers. And you get a chance to configure your own PC. With a price tag of around $1800, the Canvas is also about half the price of the Studio.

The device is made to work with Windows 10 and it may be the only input decide you need thanks to a virtual trackpad and touchscreen keyboard that can appear on screen.

The display is a 2560  x 1440 pixel screen with 100% color gamut. And it has a matte finish rather than glossy. It also has wide bezels around the display, but that’s by design: a Dell rep says the company spoke with artists who wanted to be able to draw lines that would extend to the edge of the screen without their hands falling off.

The big bezels also serve another purpose: there are magnets that can hold the pen and dial accessories in place when they’re not in use.

Dell’s Canvas is primarily meant to be used in conjunction with a second display, giving you the ability to touch one screen and see the results on another, for instance. When you’re editing videos you can manipulate the timeline on the Canvas and see the video output on a primary screen.

There’s also a custom version of Stardock’s Fences designed to let you organize files and folders on the touchscreen display.

As such, it’s really meant to be laid flat or nearly flat on a table, and the built-in kickstand is a small one for that reason. But there’s also a separate stand that you can use to position the Canvas as an upright monitor.

Dell is showing off the Canvas plugged into its own computers and secondary monitors, but it should work with just about any computers that support Windows 10. If your PC supports high-speed USB Type-C output, you can connect the Canvas to your computer with a single cable. If not, you may need to use an adapter to use DisplayPort and USB ports simultaneously to power the video and touch components.

The Dell Canvas goes up for pre-order in March and it should begin shipping in April.