Bixi is a small device that lets you control other smart gadgets by moving your hands through the air. Want to adjust the volume of your speaker without touching it? Just move your hand toward or away from the Bixi sensor. Want to skip music tracks? Wave your hand left or right.

For the most part Bixi controls things that you could also interact with using a smartphone — it talks to your speakers, light bulbs, and other smart devices through your phone. But once it’s set up, you can use it without touching your phone, which could come in handy if you’re cooking, for example, or just don’t feel like unlocking your phone.

After running a Kickstarter campaign in 2016, Bixi is coming to the US in March for $99. It’s already available in France. And the French company behind the product is already working on a second-generation model. 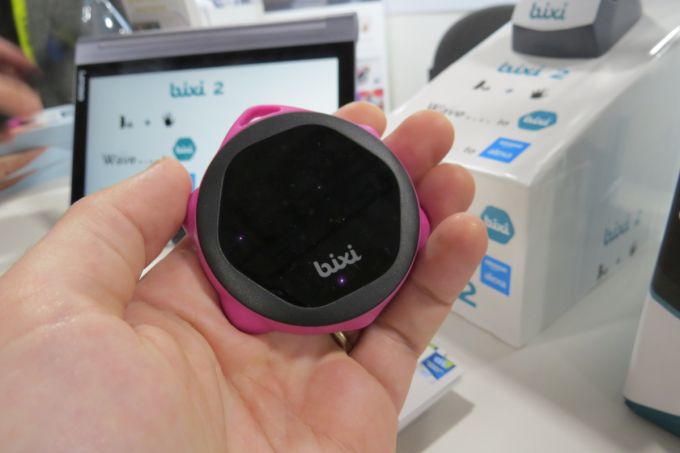 The original Bixi is a small device with a few LED lights that glow when gestures are detected. It has a magnet on the back so it can be affixed to a refrigerator or anything else metallic. And it talks to connected devices through your phone, thanks to a Bluetooth connection.

The new model, which is expected to launch in time for the 2017 holiday season, has a few new features. There’s a display that can show the time and other information. It supports WiFi, so it can be used when your phone isn’t nearby. And it also supports voice input, thanks to Amazon Alexa integration.

Bixi will announce the price for the new model closer to the launch date.

The company describes the way you communicate with Amazon Alexa using the Bixi as “whispering,” because there’s a single microphone that’s meant to pick up nearby voices, not a far-field mic array like the system the Amazon Echo uses to pick up voices from across the room.

Bixi says you should be able to whisper quietly to Alexa with a Bixi placed on your nightstand, without waking someone else in your bed. Then Alexa can perform actions like setting reminders, controlling your lights or thermostat, or other supported responses.