Hardkernel’s ODROID line of single-board computers are affordable, credit card-sized PCs with ARM-based processors. They look a lot like Raspberry Pi’s mini computers, but Hardkernel’s little computers use different processors and other hardware… and don’t really have the same kind of developer and user community that has helped the Raspberry Pi line of devices skyrocket to fame.

But still, the ODROID machines are pretty capable little computers. And if you’re tired of plugging in an external keyboard, mouse and display to use them, now Hardkernel has launched a new ODROID-VU8C touch display kit that you can use to convert an ODROID-C2 or ODROID C1+ into a small, all-in-one PC.

The display kit is available from Hardkernel for $90, or from Ameridroid for $93. 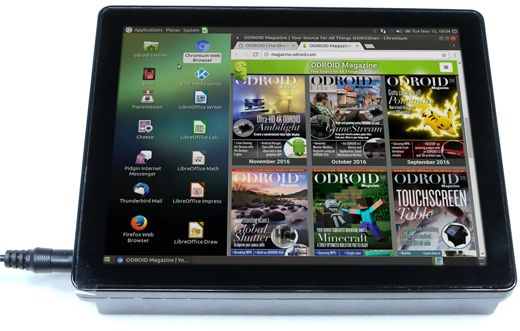 This isn’t the first touchscreen display for ODROID systems, but CNX Software notes that it’s the first official model to feature a case, allowing you to basically turn the single-board computer into a fully functional, self-contained PC.

The kit includes a 1024 x x 768 pixel TFT-LCD display with support for 10-finger capacitive multi-touch input, a power supply that provides power to both the display and your ODROID PC (sold separately), and Ethernet and USB ports that allow you to connect peripherals.

You can use the display kit (and ODROID) with Android, Ubuntu, or other Linux-based operating systems.