The makers of the UP single-board computer are back, and this time instead of a model with an Intel Atom x5 Cherry Trail processor, they’re building a “hacker board” mini PC with an Intel Apollo Lake processor.

It’s called the UP², or Up Squared. And it’s expected to ship in April.

You can reserve one by making a pledge to the company’s Kickstarter campaign, which has already exceeded its relatively modest goal of $10,968. 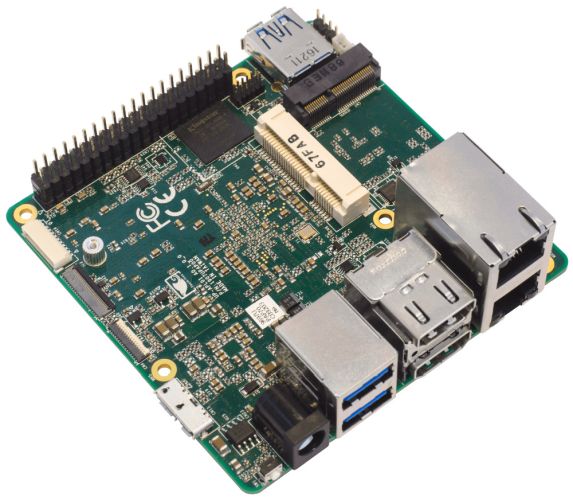 The system is available with Celeron N3350 dual-core and Pentium N4200 quad-core processor options up to 8GB of LPDDR4 memory, and up to 128GB of eMMC 5.0 storage.

The cheapest model is priced at 89 Euros, or about $98. It has the Celeron processor, 2GB of RAM, and 16GB of storage. You can pledge a bit more for extra storage and/or WiFi, Bluetooth, and accessories including a power supply, HDMI cable, and SATA cable.

Keep in mind that while you could use the UP Squared as a system for desktop computing, media center activities, or other home use, it’s probably overkill for some of those things, since it’s really aimed at hackers/makers who will take advantage of all the exposed I/O pins for connecting hardware to extend the system’s capabilities and/or debug software and hardware issues.

But it’s one of the first Apollo Lake-powered developer boards I’ve seen, which makes it an interesting upgrade from the original Up Board… even if it won’t ship for another half year.