Over the past few years we’ve seen the launch of several internet-based solutions for streaming live and on-demand TV programming. Sling TV and Sony’s PlayStation Vue are some of the first major players in the space, but AT&T/DirecTV are expected to enter the market soon.

The idea is to let customers use sign up for TV plans that may be cheaper or more versatile than what they’d get from a traditional cable or satellite provider (although the cost of internet access + internet TV might not be all that different from the TV + internet bundles offered by some ISPs).

But not all internet TV services are equal. For instance, PlayStation Vue had one feature Sling TV lacked at launch: a “cloud DVR” that lets you store programs for later viewing. But now Sling is launching its own cloud DVR. 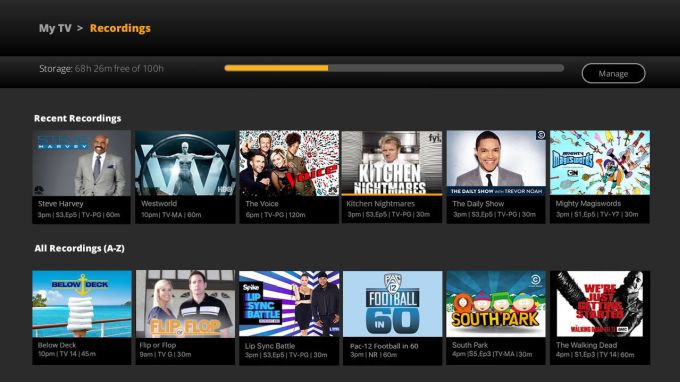 Like Sony’s version, the Sling TV cloud DVR will allow users to save programs to view at a later date, while offering the option to fast forward or rewind. This makes it possible to time-shift some programs that might not otherwise be available for on-demand viewing. And it may allow you to skip commercials (that’s how it works on PS Vue, but it’s unclear whether Sling TV will let you fast forward through them).

And like Sony’s Cloud DVR, Sling’s will not work with all channels: the company’s internet TV service only works because of partnerships with a number of TV networks, and some may opt out of the DVR functionality, which is something that’s easier to do when the “recordings” are basically saved copies of internet streams rather than videos that a physical DVR attached to your home TV setup makes manually.

Unlike Sony’s cloud DVR though, Sling TV’s will allow customers to save recordings indefinitely. PlayStation Vue automatically deletes them after 28 days. But the Sling TV version will manage your space automatically, so if you start to run out of room, older recordings you’ve already viewed will be deleted.

Sling’s cloud DVR will let users record as many programs simultaneously as they want. Since there’s no physical TV tuner required, customers with access to 60+ channels can make 60+ recordings at once.

The Sling TV DVR feature isn’t available just yet, but the company will be launching a beta for Roku users starting in December. Folks who get into the beta will have 100 hours of cloud DVR storage for no additional fee, but I wouldn’t be surprised if Sling decides to start charging a certain amount for various storage levels once cloud DVR functionality graduates from beta.