The Microsoft Surface Studio is an all-in-one desktop computer with support for pen input and an adjustable 28 inch display that allows you to tilt the screen so that it becomes a surface for writing, drawing, or other surface work that would normally require a separate graphics tablet. It’s a high-end computer with a starting price of $2,999 for a model with an Intel Core i5 processor, NVIDIA graphics, 8GB of RAM, and 1TB of storage.

But what if you want to buy an entry-level model today and upgrade it later? It turns out your options are limited.

The folks at iFixit have posted a teardown of the Surface Studio, and it reveals that the storage is the only thing that’s easy to upgrade or replace. 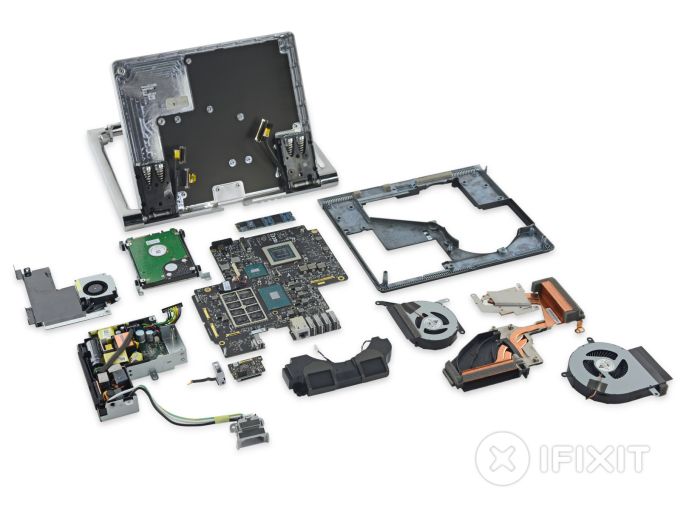 That’s because the RAM, CPU, and graphics processor are all soldered to the motherboard but there are standard 2.5 inch hard drive/SSD and M.2 SSD slots for storage.

So if you buy a model with 1TB of storage and decide you want to upgrade to a larger SSD in the future, you can do that. But if you buy a model with 8GB of RAM, that’s all you’re ever going to get. Given the high cost of this computer, that seems like a bad idea. If you’re willing to spend $2,999 on a Surface Studio, you might want to save up until you can afford the 16GB or 32GB models with Core i7 chips, which sell for $3,499 and $4,199, respectively.

The iFixit teardown notes that the SATA hard drive and M.2 SSD are both in the base of the desktop, which means they can be accessed without disassembling the display. If there is a problem with the display assembly, it can also be repaired or replaced without opening the base.

But generally speaking, this is a what-you-buy-is-what-you-get kind of computer, much like many recent high-end PCs.