Jide recently launched a Kickstarter campaign for a multi-purpose box that runs the company’s Android-based operating system. The Remix IO is positioned as a device that can be used as a sort of desktop-style computer, or as a TV box that lets you stream videos or play games.

But if you were underwhelmed by the hardware that comes with the $99 model, now there’s a more powerful version with a faster processor, twice the RAM, and twice the storage.

The Remix IO+ is expected to ship in May, 2017 and you can reserve one for a pledge of $129 or more at the same Kickstarter campaign. 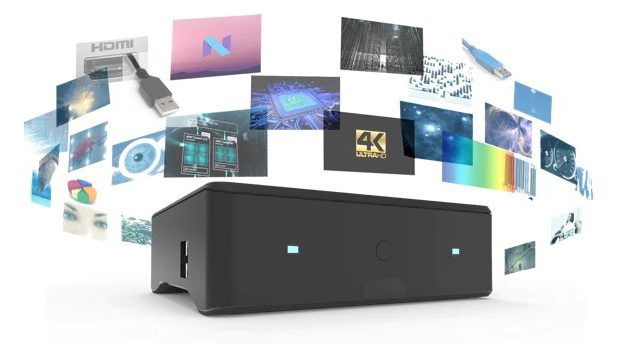 Existing backers can also add $30 to their pledge to opt for the Remix IO+ instead of the original model… but there is one advantage to getting the less powerful version: it’s expected to ship two months earlier.

Both boxes are said to support 4K video at 60 frames per second, and both feature HDMI and VGA ports, headset jacks, and microSD card slots.

But the Remix IO+ has a Rockchip RK3399 hexa-core processor with two ARM Cortex-A72 CPU cores and four ARM Cortex-A53 cores, Mali-T864 graphics, 4GB of RAM, and 32GB of storage.

It also has two USB 3.0 ports, two USB 2.0 ports and runs an upcoming version of Remix OS which is based on Android 7.x Nougat and which features a TV mode with a user interface designed to be easy to navigate with a remote control.

There’s also support for Android TV apps… although you’ll have to sideload them or use the Aptoide app store to get them, since Google Play won’t recognize the Remix IO or Remix IO+ as Android TV devices.