The latest product from the makers of the CHIP $9 computer and PocketCHIP handheld Linux computer is a gadget designed to sit on your car’s dashboard and let you control your phone with your voice.

Yes… you can probably control most recent smartphones with your voice even without an extra gadget. But Dashbot has a few nifty extras including a far-field beamforming mic array with adaptive background noise suppression to better pick up your voice even in a noisy environment, and a series of LED lights to let you know what the device is doing at a glance.

Next Thing Co’s Dashbot is powered by the recently launched CHIP Pro single board computer, and the goal is to begin shipping devices in July, 2017… assuming the project meets its Kickstarter crowdfunding goal of $100,000. 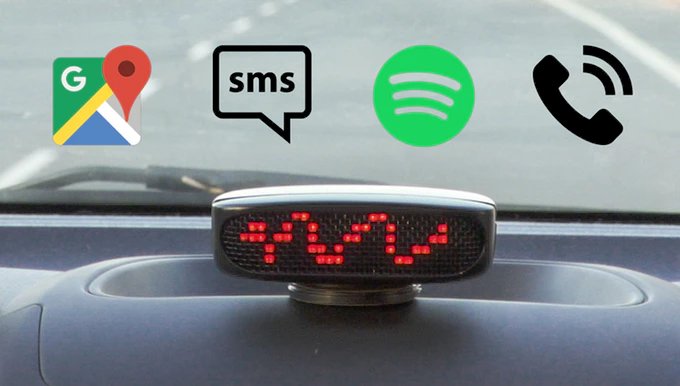 You can request a Dashbot for a Kickstarter pledge of $49 or more.

The device connects to Android or iOS phones over Bluetooth, allowing you to send text messages, play music, or get navigation directions by starting your request with “Dashbot,” although you can also chance the hotword to “Computer,” or “Co-pilot.” There are also multiple voices to choose from.

For example, “Dashbot, navigate to work” should bring up the appropriate map app and turn-by-turn directions on your phone.

When Dashbot is listening, you’ll see a wave form on the LED. And when you’re getting navigation directions telling you to take the next left turn, you’ll see a left arrow on the screen, allowing you to get visual cues without looking down at your phone.

Dashbot draws power from a 12V cigarette lighter or a USB port in cars that have them. And you can connect to a car stereo over Bluetooth or an auxiliary jack. There’s also a “retro pack” that includes a cassette adapter if you’ve got an older car with a cassette player.

The CHIP Pro computer at the heart of the system features a 1 GHz ARM v7 processor, 256MB of RAM, 512MB of flash storage, 802.11b/g/n WiFi, Bluetooth 4.2, and the Linux-based Gadget OS operating system, which the developers say makes the Dashbot a programmable device that can learn new tricks.

Other features of the Dashbot include a USB 2.0 port, a micro SD card slot, a backup battery, audio processing hardware, and a MEMS mic array, and red LED lights.

6 replies on “Dashbot is a $49 hands-free, in-car controller for your phone (crowdfunding)”