Amazon may have sold more than 5 million of its Echo line of internet-connected, voice-activated speakers in the past few years. What started off as a single product priced at close to $200 is now a family of devices including an entry-level $50 model and a portable model that sells for $130.

So what’s next? According to Bloomberg, Amazon is working on a new high-end speaker that features a 7 inch touchscreen display. 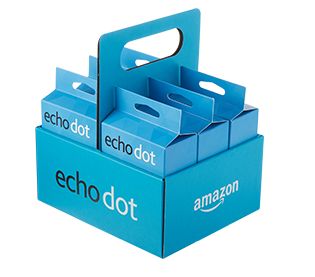 The device would still be able to respond to voice commands, allowing you to get answers to questions, control music playback, or interact with connected smart home products such as thermostats, lights, or locks. But the screen would also let you see search results or answers, as well as giving you another way to control the device.

For example, you could view calendar appointments visually instead of just allowing Amazon’s Alexa voice assistant to tell you out loud what’s next on your schedule. And while a verbal summary of the 5-day forecast is nice, sometimes it’s faster to process that information at a glance.

Bloomberg says “two people familiar with the product” say the new product would be larger than an Amazon Echo and angled so that the screen tilts upward, allowing you to see it when you’re standing up and looking down at a speaker on a tablet, desk, or counter.

It’s also expected to have improved audio performance thanks to new speakers. The new device could be launched in the first quarter of 2017… although Amazon’s Lab126 department does have a history of working on mysterious products that sometimes never see the light of day.

While the Amazon Echo has been a surprising success story as one of the first devices of its type, the company is starting to face some competition in the smart, connected speaker space. Google recently launched its own Google Home speaker.