Barnes & Noble is launching its first new tablet in four years. The new NOOK Tablet 7″ is available for pre-order for $50 and should begin shipping on November 25th, the day after Thanksgiving.

The new tablet is an entry-level device which seems to be B&N’s answer to Amazon’s successful $50 Fire tablet. 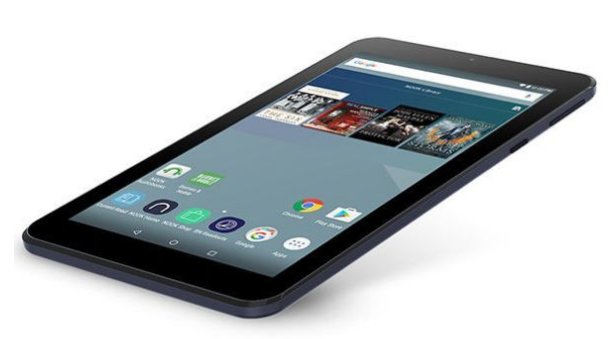 Like Amazon’s tablet, the new NOOK 7 is an Android-based tablet with a color display and entry-level specs that sells for less than the price of any of the company’s eReaders with E Ink displays.

Unlike Amazon’s tablet though, the B&N NOOK 7 ships with the Google Play Store, Chrome web browser, Google Search, and Google Maps, among other Google apps. It also comes with some B&N-specific apps including NOOK software for eBooks, periodicals, and audiobooks.

Oh, one other difference between the two tablets? While they both cost $50 right now, you’ll be able to snag an Amazon Fire tablet from a bunch of retailers for as little as $33.33 during Black Friday sales later this month.

The tablet features a 7 inch, 1024 x 600 pixel display,up to 7 hours of battery life, 8GB of built-in storage, and a microSD card slot with support for up to 128GB of removable storage.

While the product page doesn’t provide many other clues about the tablet’s specs, FCC documents suggest it has a MediaTek MT8163 quad-core ARM Cortex-A53 processor with Mali-M720 MP2 graphics, a 3,000 mAh, 11.1 Wh battery, Bluetooth 4.0, and a mono speaker.

Barnes & Noble stopped producing tablets sold under its own name in 2013, instead partnering with Samsung to sell a series of co-branded tablets starting in 2014. Those devices are basically identical to Samsung’s own tablets, but they come with some NOOK software pre-loaded and are sold at the B&N website and in B&N stores.