Apple’s holding an event later this week, where the company is expected to introduce a new MacBook pro laptop, among other things. And rumors have been making the rounds for months that one new feature for that laptop would be a touchscreen OLED toolbar above the keyboard, allowing you to interact with software-defined “keys” that could change depending on what you’re doing with the laptop.

Now it looks like those rumors were true. Picture of a new MacBook with the OLED toolbar have been leaked… by Apple. 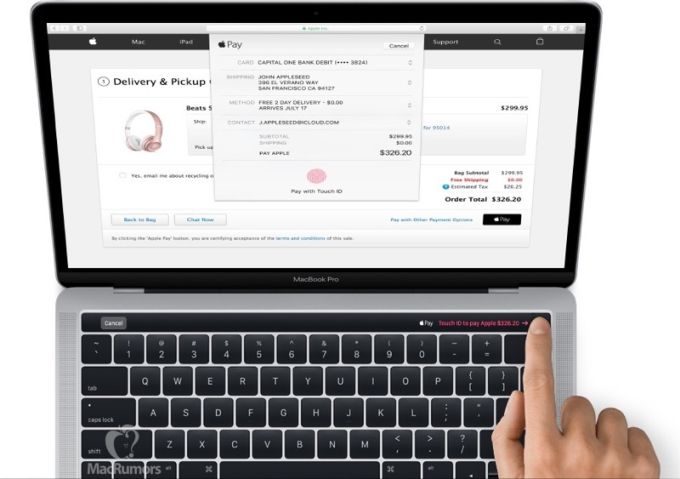 The company released an updated version of macOS yesterday, and the folks at MacRumors noticed that there are a few Apple Pay-related pictures that show the touch panel.

The touch bar seems to be called the “Magic Toolbar,” and it’s basically an OLED display that stays black when not in use, but which can light up to show buttons or messages when appropriate. It’s also touch sensitive, and seems to support fingerprint recognition: you can use Apple’s Touch ID to tap the button to initiate payments with Apple Pay, for instance.

It also looks like the new MacBook Pro may have some other updates, including a redesigned hinge and upward-facing speakers on the sides of the keyboard.

We should know more about the new laptop when Apple makes an official announcement on October 27th.