Microsoft has released a new build of Windows 10 to members of the Windows Insider program, and along with a bunch of bug fixes, the update brings support for custom touchpad gestures.

Once Windows 10 Insider Preview Build 14946 is installed on a PC, you can go into the touchpad settings menu on any computer with a Precision Touchpad and check out the “other gestures” or “advanced gestures configuration” areas to get started. 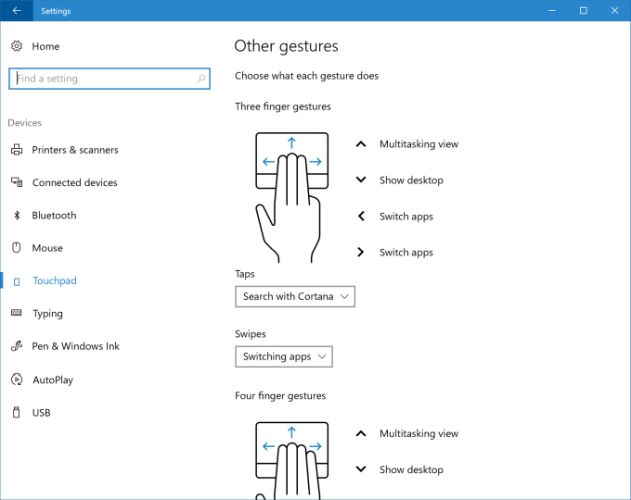 In addition to using the usual 2-finger, 3-finger, and 4-finger gestures to scroll, switch apps, open the multitasking view, and more but you can also choose what happens in some situations.

For example, you can set things so that a three-finger tap opens Cortana, the Windows Action Center, plays or pauses a media file, or triggers a middle mouse-button action. Or ou can configure a four-button left/right swipe to let you switch apps or switch virtual desktops.

The options aren’t unlimited: you can’t assign a gesture to launching a specific app, for instance. But you do have a lot more control over which gesture performs each supported action in Windows 10.

Other updates included in Build 14946 include:

As usual, there are some known issues with the latest build. One of the most problematic? If you have a 3rd-party antivirus service installed on your PC, you might not be able to update to Build 14946. Nothing bad will happen though. Your device will just roll back to the last version of Windows that you had intalled.