Rumor has it that Google will unveil two new smartphones in October. Built in partnership with HTC, the new phones won’t have the Nexus name on them: they’re said to be part of the Pixel family.

And it’s not just the hardware that’s getting a new name. ROM developer and HTC leakster LlabTooFeR shared a few pictures of a new launcher app that’s said to be from the upcoming phones… and which is called Pixel Launcher rather than Nexus Launcher.

Want more than a few pictures? LlabTooFeR has also released an apk that lets you install the launcher yourself. Just make sure to proceed with caution. 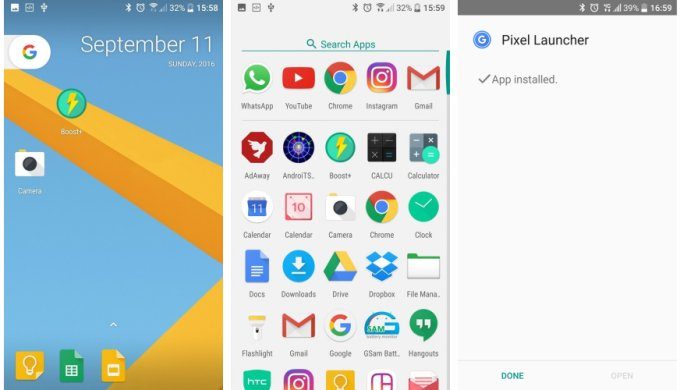 Not only is this pre-release software which may have bugs, but odds are that it hasn’t been extensively tested on whatever phone or tablet you’re trying to install it on.

That said, the launcher has some new design elements to set it apart from earlier versions of Google’s launcher. There’s no longer a dedicated home screen icon for the add drawer: instead there’s just a small  caret indicating that you can swipe up to see all of your apps.

The drawer also has a new design that emphasizes the search bar at the top. And on the home screen, there’s a Google icon that you can slide out to start a search, instead of the usual search bar that stretches from one end of the screen to the other.

Want those features, but don’t want to install a leaked, pre-release app on your phone? The latest version of Action Launcher 3 borrows a bunch of design cues from the leaked launcher. The app is available from the Google Play Store.