MSI was one of the first companies to stuff a gaming PC into a backpack in order to power a virtual reality experience that doesn’t involve tripping over wires connect your headset to a PC in the corner of the room.

Now the company is showing off a refined version of its PC-in-a-backpack. The new MSI VR One is slimmer and more powerful than the version introduced earlier this year. 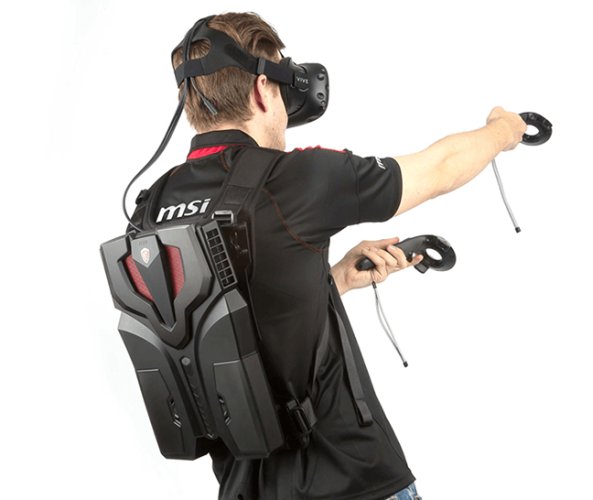 The backpack PC weighs about 7.9 pounds, features NVIDIA GeForce GTX 10 series graphics, and has two battery packs which are hot-swappable, allowing you to replace one battery at a time without turning off the PC.

It’s a good thing the batteries are hot swappable, because MSI is only promising around 1.5 hours of gaming time when using a virtual reality headset like an Oculus Rift or HTC Vive. For marathon gaming sessions, you might want to invest in a bunch of spare batteries so you can keep going without stopping to recharge.

Other features of the PC-in-a-backpack include HDMI, Mini DisplayPort, and Thunderbolt 3 ports, four USB 3.0 ports, and a cooling system made from dual fans and 9 heat pipes, which MSI says allows the VR One to generate less than 41dBA of sound while in operation. Assuming you’re wearing a VR headset with headphones or earbuds, you might not hear any sound from the PC at all.