InFocus is expanding its Kangaroo line of computers with a modular notebook. And by modular, I mean the notebook comes in two parts: a laptop shell and a removable module that has the guts of a Windows 10 PC.

When the PC module is in place, the Kangaroo Notebook is basically an entry-level Windows 10 notebook with an 11.6 inch display, an Intel Cherry Trail processor, 2GB of RAM, and 32GB of storage.

But what makes this notebook unusual is that you can remove the Kangaroo Mini PC module and replace it with a different one… effectively allowing multiple people to use the same laptop shell, while maintaining completely separate computing environments.

Oh, and when you buy the Kangaroo Notebook for $300, you get the laptop shell and two Windows 10 modules, so it’s kind of like getting two laptops… or maybe one and a half. Or something. 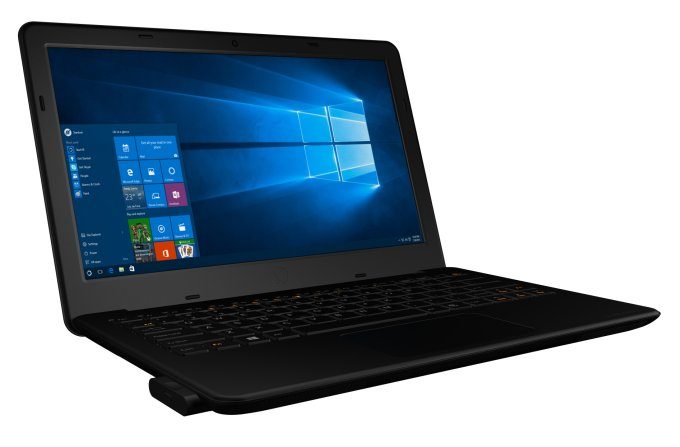 Meanwhile, the memory, storage, operating system, and an Intel Atom x5-Z8350 processor are all on a removable module that fits into a slot near the front of the computer. It also has a microSD card reader and 802.11ac WiFi and Bluetooth 4.2 support.

Sadly the removable Kangaroo Mini only works when connected to the laptop shell. You cannot use it as a standalone computer, since it lacks the HDMI and USB ports you’d need to connect a display, keyboard, or other accessories.

And the Kangaroo Notebook shell isn’t designed to be used with third-party PCs like a Raspberry Pi or Intel Compute Stick… or, you know, a Kangaroo Mobile Desktop.

So what’s the advantage to buying a Kangaroo PC rather than some other, one-piece notebook?

In addition to allowing you to use multiple modules with the same PC (maybe one for work and another for personal use, or one for your kids and one for parents in the family), the modular design opens the possibility that you could use the existing laptop shell with a future module… or a current-gen module with a future laptop shell.

But that’s just a theoretical possibility for now: InFocus has made no commitment to releasing upgraded hardware. There are currently no plans for a laptop shell with a 1920 x 1080 pixel display, for example. And Kangaroo PCs don’t have a great track record with upgrades: when the InFocus launched the Kangaroo Mobile Desktop Pro with a new Pro Dock earlier this year, the company did not make the Pro Dock available separately for customers that had already purchased a cheaper Kangaroo desktop PC.

So if you’re interested in picking up a Kangaroo Notebook, I recommend buying it on the merits of what it provides today, not for the promise of what it might be able to do in the future.