Virtual Reality devices like the HTC Vive, Oculus Rift, and PlayStation VR have gotten a lot of attention from gamers. But you can also use a VR headset to explore distant lands… or the bottom of the sea or the night sky. You can watch 360 degree movies, make music, or create paintings.

So HTC is launching an app store for VR apps other than games. It’s called Viveport. It went live today. And for the first 48 hours after launch a handful of apps are available for just $1 each. 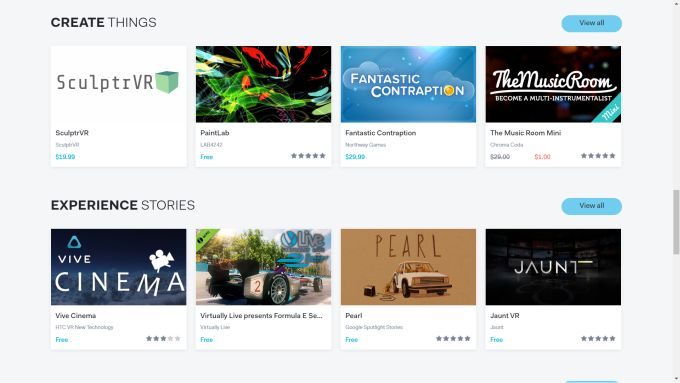 If you want to find games that work with a Vive headset, you can buy them from Valve’s Steam game platform. Valve also worked with HTC to develop the Vive system. You can also use some games and apps from third-party sources.

Viveport puts non-games front and center, starting with about 60 titles that are available at launch. That might not sound like much, but VR is still a pretty new technology, and there aren’t that many PC apps designed for Vive-style headsets yet. The list will likely grow… and there’s