When hackers managed to port Android 7.0 Nougat to run on the HP TouchPad tablet, the first question that came to many people’s minds was “what about the HTC HD2?”

Yep. You can run Android 7.0 on that aging smartphone too. Well, kind of. 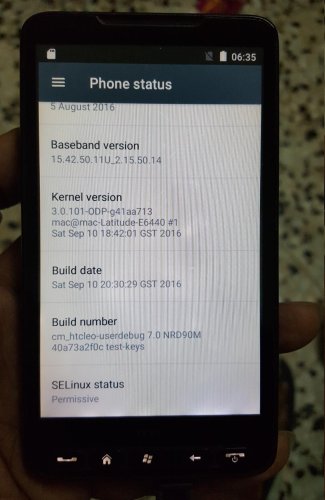 Developer macs18max managed to get the HTC HD2 to boot a custom ROM based on Android 7.0, but he says the phone doesn’t seem to have enough RAM for the operating system to run comfortably… so he doesn’t expect the port to reach “daily driver” status.

Still, for a phone that was released with Windows Mobile 6.5 software in 2009, the HTC HD2 has had a pretty remarkable afterlife.

Microsoft and HTC never released a software update that would allow the phone to run Windows Phone 7 or newer software. But the independent developer community stepped in and helped keep the phone alive thanks to ports of Android and other operating systems (including Windows Phone 8, Windows RT, Firefox OS, and more).

Last year we saw a port of Android 6.0 for the HD2, and now that Android 7.0 is available, it looks like developers still haven’t given up on the device… even if flashing CyanogenMod 14/Android 7.0 is more of a party trick than a useful software update at this point.