Lenovo is the latest company to launch a Microsoft Surface Pro clone… with a significantly low price tag.

The Lenovo Miix 510 is a 12.2 inch tablet with a full HD display, a built-in kickstand, and a starting price of $600. And that price includes a detachable keyboard.

Microsoft’s Surface Pro tablets have prices that start at $799, and the keyboard is sold separately. Microsoft does include a digital pen though, while Lenovo will sell that separately as an optional accessory.

Lenovo unveiled the Miix 510 at IFA in Berlin in August, and I got a chance to play with one for a few minutes at an event in New York last week. 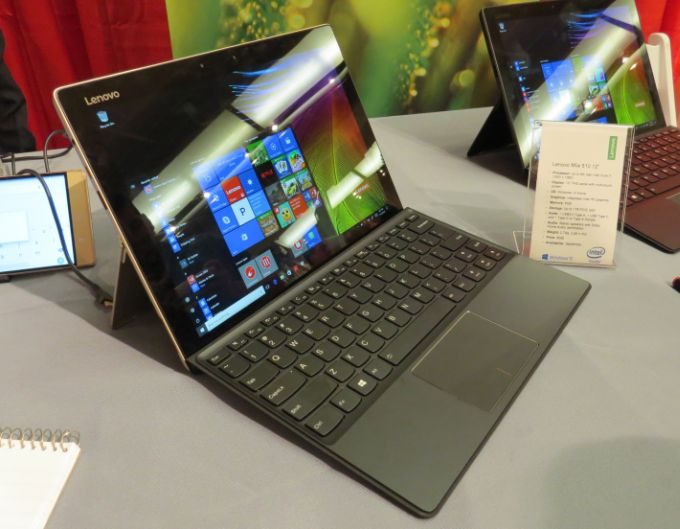 Note: The pictures in this hands-on article show a pre-release Lenovo Miix 510 with a gold case, but Lenovo is only actually selling this 2-in-1 tablet in two color options: black and silver. There’s no gold option.

Much like the Acer Switch Alpha 12 I reviewed this summer, the Miix 510 features a 12 inch display, a built-in kickstand, and a reasonably affordable price tag.

But the Acer tablet has a higher-resolution display, a fanless design, and mediocre battery life. I can’t say anything about the battery life from Lenovo’s tablet yet, but I can say that the 2 pound tablet feels solid, but compact when held in one hand, has plenty of vents to help keep things cool (along with a fan in the case), and has a pretty nice little kickstand in the back, which allows you to prop up the tablet at nearly any angle.

The stand is based on the same watchband-style design the company uses for some of its Yoga-branded devices like the new Lenovo Yoga Book.

The keyboard connects to the base of the tablet via strong magnets which hold it firmly in place at a slight angle so that the front of the keyboard is lower than the back. Typing felt pretty comfortable, and the curvature of the keys give the keyboard a distinctly Lenovo-style feel. 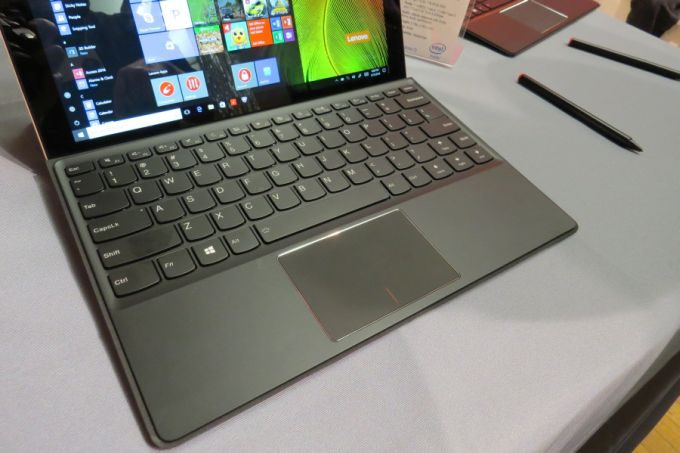 But like the magnetic keyboard covers used for the Surface Pro, Acer Switch Alpha 12, and many other other detachable tablets, this keyboard isn’t firm enough to make the computer easy to use on your lap… or at least not as easy as an actual laptop PC. It works just fine on a table or desk, though.

Lenovo will offer models with up to a Core i7 Skylake processor, up to 8GB of RAM, and up to 1TB of PCIe solid state storage.

Each model has stereo speakers, a 5MP rear camera and a 2MP front camera as well as dual array microphones, 802.11ac WiFI, and Bluetooth 4.0.