Apple says it took “courage” to launch an iPhone without a headphone jack. The internet seems to disagree. But on a more practical level, how exactly are you supposed to use headphones with an iPhone 7?

Well, you have a few options: use wireless headphones like Apple’s new AirPods. Use special headphones that connect to the phone’s lightning port. Or use the 3.5mm to lightning adapter that comes with the iPhone to connect any standard headphones to the phone.

But if you do choose to use wired headphones… how do you charge the phone when your headphones are connected to the device’s only port?

It turns out there’s a docking station for that.

Apple has offered a Lightning Dock for $49 for a while, and it works with the new iPhones. The dock has a lightning connector for an iPhone 7 or iPhone 7 Plus. And it has two ports: a lightning port and a 3.5mm audio jack.

Plug your phone into the dock, using a USB-to-lightning cable to connect the dock to a power source (or a PC) and you can charge the phone. And you can plug headphones or speakers into the 3.5mm audio jack to listen to music at the same time.

Interestingly, this solution won’t let you use lightning headphones while charging the phone since there’s only a single lightning port (which you use to charge the iPhone).

Looking for a solution that lets you charge the phone and use lightning headphones? Then you may want a third-party adapter like Belkin’s new awkwardly (but descriptively) named Lightning Audio + Charge RockStar. 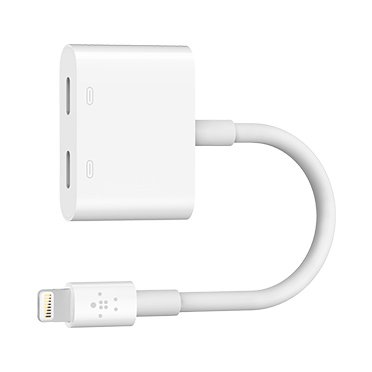 Belkin’s $40 dongle basically turns the single lightning port on your phone into two ports: one for charging and the other for connecting headphones.

All told, the best option for charging your iPhone 7 while using headphones may just be to invest in a pair of wireless headphones. And you don’t need to spend $159 on Apple’s new AirPods to get them. There are plenty of existing Bluetooth earbuds available for under 25.

Correction: An earlier version of this article mistakenly identified the Apple Lightning Dock as a new product. It’s actually been available for over a year, and it has always had a single Lightning port and a 3.5mm headphone jack. That headphone jack just looks more useful now that Apple has begun selling phones that only have one port that’s used both for charging and for audio output.