Xiaomi has been selling Mi Box media streamers in China for a few years, but earlier this year the company announced that it was bringing its first Mi Box to the United States, and that it would be a device running Android TV software that’s capable of streaming 4K video.

While the US price and launch date hasn’t officially been announced yet, it passed through the FCC this summer, and it seems at least one Walmart store had some in stock… and put them on the shelf.

That’s where George Garrett spotted one on sale for $69… and then bought one to take home and try. 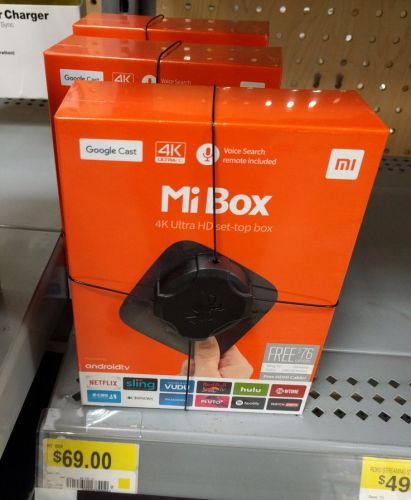 The Mi Box has pretty impressive hardware for a $69 device, including a quad-core ARM Cortex-A53 processor, HDMI 2.0a support, 4K/60fps and HDR video support, 2GB of RAM, and 8GB of storage.

It supports 802.11ac WiFi and Bluetooth and comes with a Bluetooth voice remote control. Xiaomi is also expected to offer an optional Mi Game Controller.

While the Chinese versions of Xiaomi’s media streamers run a customized version of Android designed for streaming regional content, the US version will run Google’s Android TV software with support for apps like Neftlix, YouTube, Google Play Movies, Kodi, and Plex. Interestingly, Garrett notes that there seems to be a “Mi Box Recommends” section that cannot be removed.