Need more storage for your camera or laptop? Soon you may be able to get a lot more. SanDisk has unveiled new SDXC cards with 1 terabyte of storage.

At this point, the new SD card is just a prototype, so it’s not clear how much it will cost or when it will be available for purchase. But here’s what we do know: this SD card can hold twice as much stuff as 512GB cards that had been the largest available previously. 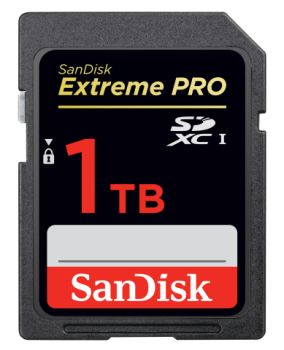 We also don’t know anything about the speed of the new card, although Western Digital-owned SanDisk is branding the new card as part of its Extreme Pro series, which suggests it’ll be relatively zippy.

Odds are that the new cards will be also be pretty expensive at launch, but prices for flash storage have a way of coming down rather quickly.

I still remember how excited I was when the first postage stamp-sized MMC cards came out around 15 years ago, allowing me to store a whopping 4MB of data on removable media. That was almost enough space for four MP3 files!

But SD cards aren’t the only game in town anymore. They have to compete with the physically smaller micro SD cards, which are small enough to be used in (some) smartphones. And there’s also the upcoming UFS cards which are similar in size to micro SD cards, but which promise much faster read and write speeds.