It’s hard to find a good smartphone with top-tier specs and a screen smaller than 5 inches. But it looks like a phone that matches that description may be on the way.

An unnamed, unannounced device with a 4.6 inch, 1920 x 1080 pixel display, 6GB of RAM, 64GB of storage, and a Qualcomm Snapdragon 820 processor showed up at the GFXBench website recently. 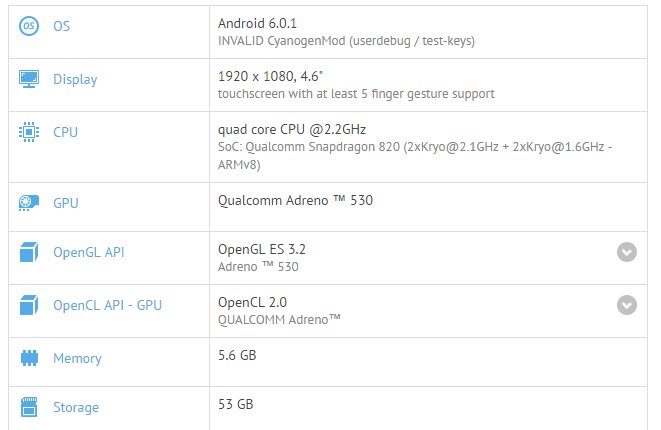 The phone is also said to have a 15MP rear camera with 4K video recording capabilities and a 7MP front-facing camera (although I suspect these are actually 16MP and 8MP cameras… those numbers are a lot more common).

Overall the specs sound pretty stellar for any phone, let alone one with a small screen (well, small by 2016 standards, anyway… there was a time when this would have been considered a phablet). But there’s no indication of the phone’s battery capacity, so it’s possible that this phone will offer amazing performance… and need charging three times a day.

While there’s no brand name mentioned in the listing, some observers are speculating that the phone cold be a OnePlus 3 Mini. OnePlus CEO Carl Pei says it’s not, which means someone else may be developing the small-screen/big-spec smartphone (which does have hardware that looks a lot like what you get with the full-sized OnePlus 3).

GFXBench has been known to get screen sizes wrong in the past though. So it’s possible this phone doesn’t have a 4.6 inch display.

It’s also worth noting that GFXBench says the phone is running a version of CyanogenMod based on Android 6.0.1.