Having trouble getting WiFi to blanket your whole house? You might need a better router: switching from a $30 802.11b/g/n router to a dual-band 802.11ac WiFi router a few years ago did wonders for the connectivity in our house.

But sometimes that’s not good enough… and over the past year or so a number of companies have started to embrace a different solution: instead of just putting a router in one part of your home, maybe you should put hardware in multiple locations to better distribute your wireless signal.

Rival Luma uses a similar system, but only sells a 3-pack for $399.

Now one of the biggest names in the WiFi router space is getting on the action with the launch of the Orbi WiFi System… but it works a little differently. 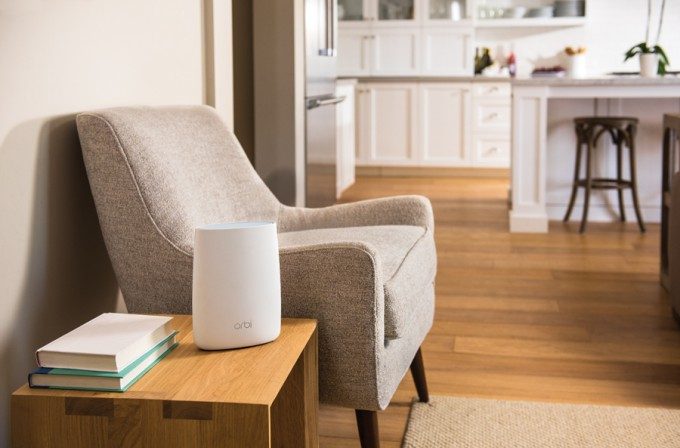 Orbi is coming in September for $400, and the basic WiFi system consists of two parts: a router and a satellite. The idea is that you plug the router into your modem and then place the satellite in a central location in your home.

The system also supports additional devices if you want to buy extra satellites for $250 each, although Netgear says a single router and satellite should be enough to cover most homes.

The router sends a signal to the satellite, and the two devices work together to blanket your home in WiFi.

Since a lot of people probably end up putting their router next to the modem in their office, living room, or wherever else your ISP installed it, the effectiveness of the router may be limited by the location. This sort of multi-device system could overcome this by letting you put the satellite in a location where it will be able to broadcast to your whole home. The devices in this category also tend to be a bit more attractive than a typical black box router with antenna jutting out at weird angles.

Wondering how the internet signal gets from the router to the satellite? Netgear’s system uses Tri-band WiFi. The two pieces of the system communicate with one another via a dedicated 1.7 Gbps, 5 GHz band. Then the system sets up separate WiFi network in the 2.4 GHz and 5 GHz bands for connecting your devices.