As expected, Intel’s Atom branding for low-power processors isn’t dead. The company has just stopped using the Atom name on its chips for laptop, desktop and tablet PCs… and is instead launching new Atom chips designed for Internet of Things (IoT) products.

At the Intel Developer Forum in San Francisco, Intel unveiled a new system-on-a-module aimed at IoT developers. It’s called the Joule, and it’s powered by a new Intel Atom chip.

The Joule platform can support input from Intel RealSense cameras and other sensors, allowing devices to detect and react to the world around them. It also features 802.11ac WiFi support and the ability to capture 4K video.

The whole module measures about 1.8″ x 0.9″, making it small enough to pinch between your finger and thumb. 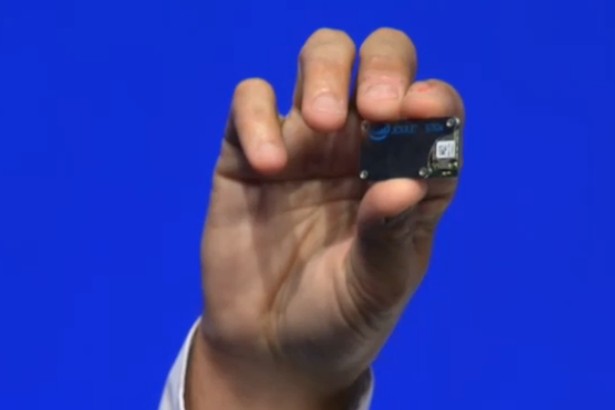 Some early applications include wearable smart glasses from PivotHead, and robots from Canonical, Microsoft, and vStone.

Intel is making Joule systems available to developers attending IDF, and it’ll be available for purchase online soon. It should start shipping in September.

There will be two Joule platforms available at launch”

Both models supports Bluetooth 4.1, USB 3.0, and feature MPI, CSI, DSI, GPIO, I2C, and UART interfacs. And both are designed to run Linux-based software designed for IoT and smart device applications.