Intel CEO Brian Kraznich didn’t have much to say about the company’s upcoming 7th-gen Core chips during his keynote at the Intel Developer Conference today. He’s too busy talking about virtual reality, drones, automobiles, and other new product categories that Intel wants in on. But the company still makes most of its money selling PC chips, so he did have a few comments.

The chips, formerly code-named “Kaby Lake,” are now shipping to computer makers (we already knew that) and you should be able to buy laptops featuring 7th-gen Core chips this fall. 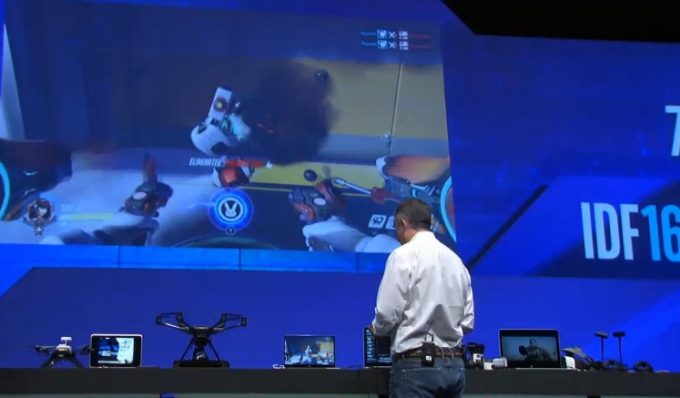 In a brief demo, Krzanich played a bit of Overwatch on a Dell XPS laptop featuring an Intel Core i5 Kaby Lake processor.

The implication is that Intel HD graphics is now capable of handling even the latest PC games, without the need for expensive, power-hungry discrete graphics processors… although I suspect you’ll still get better performance if you opt for a laptop with the latest AMD or NVIDIA graphics.

Intel’s Kaby Lake chips are the third line of processors from the company to be built on a 14nm process. The move to 10nm is taking a bit longer than expected. But Intel is still planning to offer optimizations that mean the new chips should offer somewhat better performance than you’d get from a 6th-gen Intel Core “Skylake” processor.