The Google app for Android and iOS is generally designed to let you search the web. But between now and August 21st you can also use it to play 7 mini-games inspired by the Olympics. 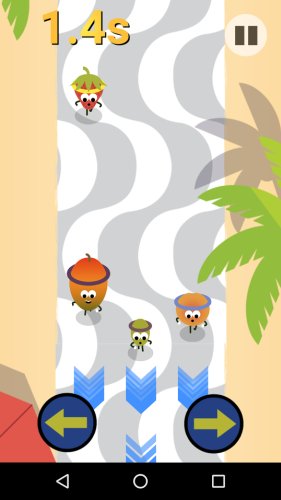 Just fire up the Google app and click the Google Doodle to open a list of available games. They’re each inspired by Olympic sporting events including running, biking, and swimming. They each take just a few seconds to play (but have handy re-play buttons so you can try again for a better score). And they all feature fruits as protagonists, including strawberries, pineapples, and blueberries.

Google has a long history of creating animated versions of its logo for the Google website and/or the company’s mobile apps. This isn’t the first time the company has hidden an interactive game behind the doodle either.

Previously we’ve seen Doodles including a playable version of PAC-MAN, a solvable Rubik’s Cube puzzle, and even a Slalom Canoe game fro the 2012 Olympics.

Hopefully this year’s mini games will also be archived on the web so you can play them even after the 2016 Olympic games in Rio are over.