Google Android 7.0 has updated notification and quick settings features, support for viewing multiple apps at the same time, and many other new features. But one change Google didn’t announce? The ability to customize the navigation bar on the bottom of your screen — you know, the space where the home, back, and recents buttons show up.

But a tipster sent Android Police a series of pictures showing that there’s a navigation bar customizer hidden in Android 7.0. 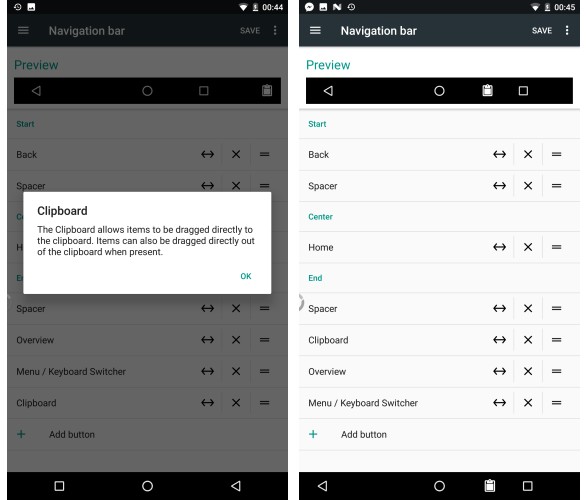 The idea is to let users change the order of the three main buttons… or hide those buttons if they choose. You can also add other buttons including a Clipboard icon, a keyboard switcher icon, or a button that can emulate any key press from a keyboard.

It’s possible that Google will make these features available in a future update such as Android 7.1 or Android 8.0. But it’s also possible that the navigation bar will never be anything other than a hidden feature that can be triggered by developers and other advanced users.

Google has a history of testing potential features for new versions of Android, and then deciding that they’re not ready for prime time… and hiding them instead of removing them entirely.

Last year users discovered multi-window support hidden in Android M, for example, but Google didn’t actually make that feature publicly available until Android 7.0 launched. And a few years ago some users found a hidden privacy feature called App Ops… which was never really released, but which may have laid the groundwork for Android 6.0, which does give users more control over the permissions used by their apps.