Acer is launching a whole new line of convertible notebooks this fall. The Acer Spin line of notebooks all feature touchscreen displays and 360-degree hinges. But there’s a pretty wide variety of prices, screen sizes, and specs.

The Acer Spin notebooks should begin showing up in North America in September, although some models won’t be available until later in the year. 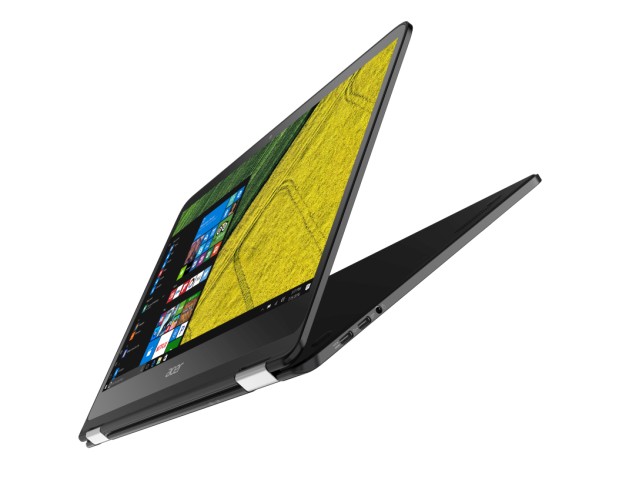 This may be the most impressive model of the bunch, at least in terms of portability. The Acer Spin 7 features a 14 inch, 1080p IPS display with Corning Gorilla Glass 4.

But while there are Acer Spin laptops with smaller screens, the Spin 7 is the thinnest and lightest member of the family, weighing about 2.65 pounds and measuring just 0.43 inches thick

So how did Acer squeeze a bigger screen into a smaller laptop? By using an all-metal case, a smaller battery, and a lower-power processor. The Spin 7 has a 4.5 watt Intel Core i7-7Y75 processor, compared with the 15 watt CPU options available for other models.

Acer says the notebook should get up to 8 hours of battery life and ships standard with 8GB of RAM and a 256GB solid state drive. The notebook has a matte black case with polished silver hinges, two USB 3.1 type-C ports, and a glass touchpad.

This model should be available in North America in October for $1,199.

Acer’s 13.3 inch model may not be as compact as the Spin 7, but it’s a lot cheaper, with a starting price of $599. It should also be available in North America in October, although it should hit Europe in September for €599 and up.

This model is available with Intel Core i3 and Core i5 processor options and up to 16GB of RAM and 512GB of solid state storage. Note that Acer will offer models with Kaby Lake chips in some regions, with Skylake options available in select other markets.

The notebook has a 1080p IPS touchscreen display and an active digitizer that supports an optional Acer Active Pen.

Acer says the Spin 5 should be able to get up to 10 hours of battery life.

Acer will offer models with Celeron and Pentium Apollo Lake processor options, and the company says the notebook will be available with up to 8Gb of RAM, up to 1TB of hard drive storage, or up to 64GB of eMMC flash storage (which, I suspect, is what you’ll get on the entry-level models.

The Acer Spin 1 should be available in China in October, Europe in November, and North America in December, for starting prices of ¥2,999,  €299, and $249, respectively.

The model that interests me least will probably be one of the better sellers… because people like 15.6 inch laptops, even though their less portable. Go figure.

The $499 starting price probably won’t hurt either. And this model will be available with a wide range of options, including Celeron, Pentium, Core i3, Core i5, and Core i7 processor options.

Acer will offer models with up to 12GB of RAM, up to 256GB of SSD or 1TB of hard drive storage, and HD or full HD displays.

The notebook measures 0.9 inches thick and weighs 4.7 pounds, and it should get up to 9 hours of battery life.

The Spin 3 launches in Europe in September and North America in October.