Xiaomi is holding an event on July 27th, when the company is expected to introduce its first laptop, among other things. We’ve already seen a few alleged photos of the upcoming laptop, but now some slides and pictures said to be from the upcoming presentation are making the rounds.

Take these with a grain of salt because they’re relatively easy to fake… but nothing in the presentation seems particularly unreasonable… including the derivative design of the laptop.

If the leaked specs are accurate, it looks like Xiaomi will launch at least two models: a $600 laptop with mid-range specs and a high-end “Pro” model with a $1000 price tag. 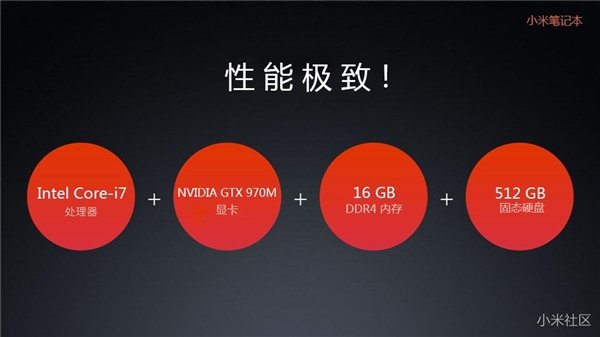 The cheaper version is said to feature a 15 watt Intel Core i5-6200U processor with Intel HD 520 graphics, 8GB of RAM, and 256GB of solid state storage. That’d put it squarely in competition with existing low-to-mid-range ultrabooks like the Asus Zenbook UX305UA.

Xiaomi’s Pro version is said to have much more powerful specs, including a 45 watt Core i7-6700HQ processor with integrated Intel HD Graphics 530 and NVIDIA GeForce GTX 970M graphics as well as 16GB of RAM and a 512GB SSD.

$1000 might be a lot of money for some people to spend on a laptop, but it seems like a pretty good price for a model with those specs… although there’s no information about the screen size or resolution, battery life, or weight of the laptop in the leaked presentation slides. (Rumor has it that there will be 12.5 inch and 13 inch models).

What we do have are some pictures… which suggest that the laptop has a less-than-original design. While a lot of people have been expecting the notebook to look like a MacBook (much like early Xiaomi smartphones looked a lot like iPhones), I think it actually bears a stronger resemblance to a different laptop: the Asus ZenBook Pro.

It’s possible that the pictures are fake… but while the two laptops look extraordinarily similar in these images, there are a few small differences including the layout of the keyboards and ports.

You can find more pictures at GizmoChina… or just wait a few days for Xiaomi to officially unveil its first laptop.